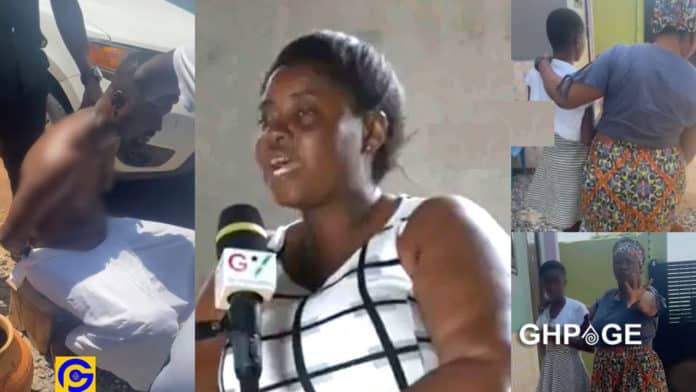 The wife of the Ghanaian businessman who allegedly attempted to sacrifice his own daughter for wealth has broken her silence over her husband’s criminal actions.

A video went viral on social media Friday after a traditional herbalist called the police on a man who had travelled from abroad to consult him for help about his financial woes.

According to him, the man claimed he was struggling overseas so he came to him and expressed his readiness to do anything to get back on his feet.

READ MORE: Father arrested for allegedly trying to use his daughter for sika duro

He said the desperate father claims to have 12 children and was willing to kill two of them to gain financial freedom. But he gave a tip-off to the security service to cause the man’s arrest because killing people for rituals is a crime and against his practice.

Speaking in an interview with state broadcaster GTV, Evelyn Kemeh said following the return of her Kumasi-based husband from abroad, they have only been in touch over the phone a few times but he never mentioned his problems to her.

According to her, the husband called her on Tuesday – three days earlier before the incident – about his plans to take his daughter out to a tailor to take measurements of her for a friend abroad who wanted to sow some clothes and send them down to her.

She said after he picked up the girl on Friday morning, the next phone call that came in was from the police who informed her about his husband’s arrest.

Watch the video below as she narrates the circumstances that landed her daughter in the house of the herbalist.

Meanwhile, the herbalist who blew an alarm on the suspect who is now in the grips of the police has been exposed as a serial blackmailer and fraudster.

According to a series of Facebook posts shared by social commentator Kwame A plus, the man has a long history of extorting money from people and/or setting them up.

Per the content of the information relayed to him by some military men who had worked with the fetish priest when he was in the Ghana Armed Forces, he allegedly was sacked from the force because of his secret schemes which were aimed at disgracing others.

The police have commenced investigations into the case.