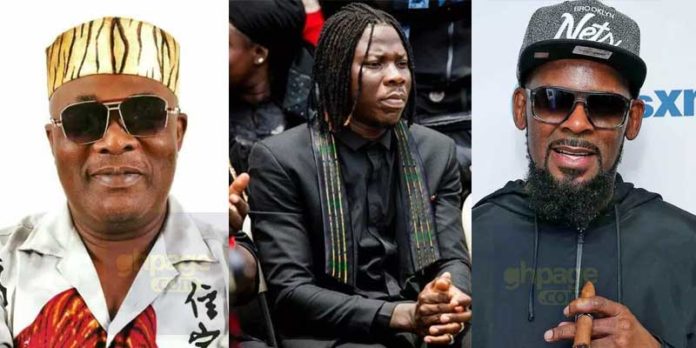 The head of Zylofon Arts Club, Willi Roi has reacted to reports that he blocked possible collaboration with America superstars R.Kelly and Teddy Riley after they contacted him to help them do a song with him.

The news of the blocked collaboration came to light yesterday morning after artiste manager Mr Logic revealed on Accra-based Hitz Fm with KMJ where he stated that the two artists reached out to Willie Roi to help them have a collaboration with Stonebwoy but he kept it a secret from him.

“I asked Willi Roi why he wasn’t revealing the information to Stonebwoy and he said Stone was stubborn and then he will tell him about R. Kelly and Teddy Riley’s intentions to feature Stone” Mr Logic said.

Meanwhile, Willi Roi in his reaction the above news revealed that the American artist mentioned above contacted him when they were looking at Zylofon portfolio and chose Stonebwoy as the possible artiste they want to feature.

When asked whether he informed any member of the Zylofon Music executives or board, he explained that “I negotiate and when the deal is ready, he put it on the board so unfortunately when the conversation came, Mr Logic was at my office so am even surprised he will go out there and talk about it when the matter is just the beginning of the process.

Asked when the conversation happened, he emphatically stated: “Just about two months ago” but Mr Logic refuted such claim stating that it happened in March where he obliged.

According to him, “the deal is not dead, we are just waiting for them to give us schedule; some of them the producers want to come next month, they’ve bought their tickets and they are coming next month”

Asked whether he told Stonebwoy about the possible deal, he said: “you don’t talk to your artiste until the deal is set, when is set and then you say these guys are ready… that’s not how it’s done”

Read this: Sarkodie spotted hanging out with Strongman’s girlfriend

“As an A&R, we push repertoires and when people are interested, you make sure the thing is ready before you get your artist involved”

Meanwhile, Stonebwoy in his reaction to news that his fellow Zylofon employer Willie Roi blocked his possible collaboration with America superstars R.Kelly and Teddy Riley after they contacted him to help them do a song with him shared a post that sort to suggests that he was stronger and badder than him(Willie Roi).

He posted: “Physically I’m badder Than Them Spiritually I’m tougher Than Them None A Them Can Test The Apple Of JAH EYE ?…#ATTWC18?”

Read this too: I will change a lot of things in the Ghana Music Industry – Trigmatic declare his intentions of contesting for MUSIGA Presidency