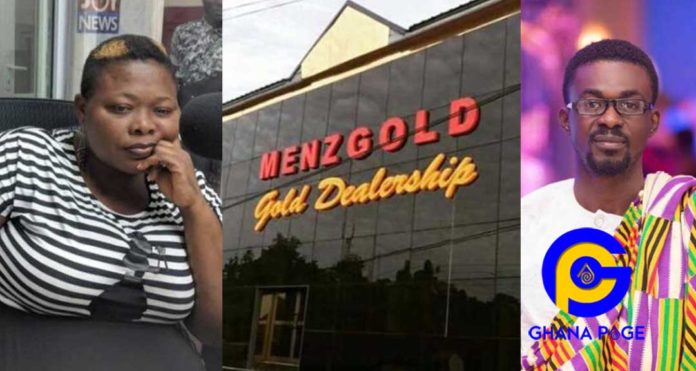 Mother of 3, Janet explained that she needed money to start her own business and a friend advised her to get money from the bank and invest in Menzgold.

SEE ALSO: Amount Yvonne Nelson, A Plus others allegedly invested in Menzgold

“A friend who supports me through hardship introduced Menzgold to me pointing out that I cannot depend on the coins I am making here and there. So, she advised I take a loan and use the little interest I get from it to support the other things I was doing on the side,” she told Evans Mensah on Ghana Connect, Friday.

According to Jane, she thought the advice was timely because her landlord had just informed her that he’d increased the rent and demanded that the new fee is paid in advance. Her rent has been increased from ¢350 to ¢500 for a two bedroom apartment in the capital.

“I told her I did not have enough in terms of balance in my account but she motivated me to go to my bankers to inquire if they will allow her to guarantee for me. Unfortunately, my husband was not around so I did that on my own.

“I took ¢24,000 and deposited it there on July 13, 2018. The next month, I was given the extra value which I had planned to use to repay the loan so when I finish paying it, I will use the capital for my business,” she said in tears.

Jane was to get ¢2,400 as interest from the gold dealership firm every month, ¢1200 of which she had planned to use to pay her monthly loan repayment at her bank.

Things took a wild turn when she was alerted by a friend that Menzgold was having challenges and she [the friend] did not get her interest as scheduled.

She got the shock of her life when she called to inform her husband about her move to earn something to help the house expenses.

“He shouted, ‘Herh! I did it too but I hear the place is collapsing’,” he narrated.

Unknown to her, he had also taken a loan of ¢60,000 from his bankers in Sunyani, where he was based, to invest in Menzgold.

Her husband came back to Accra after a week only to be hit by the hard reality that Menzgold was indeed having troubles with the Securities and Exchanges Commission (SEC) and they had been told to stop operations.

“That day we confirmed that I realized I was shaking terribly…I told him and he told me to go and shower and I will be fine but I was dying inside,” she said.

She sped to the hospital with her one-year-old daughter strapped behind her back.

“Immediately the doctors checked my temperature and blood pressure, they took the baby away from me…I was scared and didn’t know what was happening, Janet said.

Part of text culled from myjoyonline.com