For some ridiculous reasons, the bleaching among the youth has surged. The use of creams and pills to look fair has become too common and the people who patronize it claims they want to look more beautiful.

Some black skin people have the conception that the western world people’s skin color is the measure of beauty and as such are patronizing creams and drugs which has the adverse effect on their body in the long run.

It’s on the effects of skin bleaching that a Ghanaian woman has narrated how she was blinded as a result of prolong use of bleaching creams. 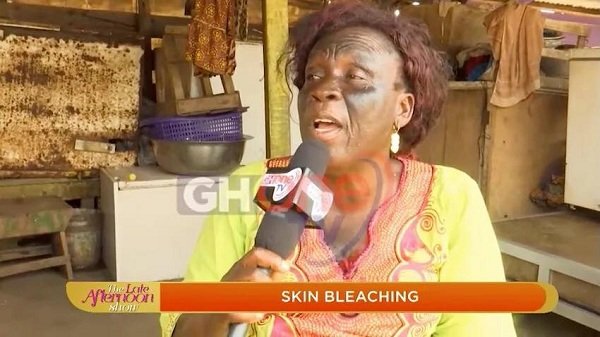 SEE ALSO: Shatta Wale has finally opened up about his 3 children, their mums & why he is still with Michy

In a pre-recorded video that was shown by Berla Mundi on her show” The Late Afternoon Show”, the woman who is in her 60s explain that she started using bleaching creams in her 20s because she wanted to look more beautiful and fair.

Unfortunately for her along the line, the hydroquinone a bleaching agent in creams came in contact with her eyes rendering her partially blind.

It was until she underwent a surgery at the Korlebu Teaching Hospital at a cost of GHS8000 that she was able to see clearly again.

SEE ALSO: Video: “Are Men Scarce In Ghana”? Ghanaian Women Are Demanding For S*x Toy To Satisfy Themselves

Speaking in the Ga language, she said: “I was a very beautiful woman when I was a young girl and I wanted to be more beautiful and fair and so anytime I hear about a new bleaching cream on the market, I went in for it. But later, I went blind because the cream went into my eyes.”

“There is no benefit in bleaching, only regrets and skin infection in the long run.”

Dr. Hannah-Lisa Tetteh who was on the show as a guest added that the hydroquinone a bleaching agent in creams is very dangerous on every part of the body it touches so people should desist from using such creams.