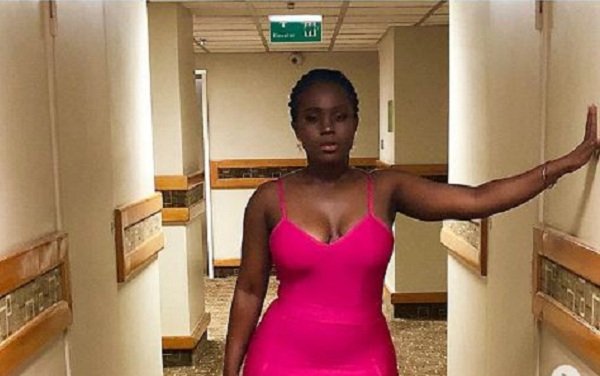 Unquestionably, YOLO actress Serwaa Opoku Addo is currently causing confusion on the internet with a new photo of herself.

Describing the dress she wore from the pose, Serwaa wears a ‘piece’ of pink dress which exposes her ‘heavy’ and curvaceous body. she exposed some parts of her body such as the thighs and her b00bs.

The actress posted this picture on her Instagram page which has triggered a lot of reactions and comments from her fans.

After posting the picture of herself on her Instagram page, many fans commented on it.

These are some of the comments;

Another fan by name Listo praised her look by writing down simply: “Beauty in paradise”

Another fan by the name Writchidsnipes literally begged the YOLO actress by writing “No! You won’t kill me Serwa.”

Serwaa Opoku Addo, however, is a lead character in the youth TV series You Only Live Once (YOLO) which features veteran characters including Jackie Appiah, Adjetey Annang and a host of others.

It’s revealed that the budding YOLO actress took this picture in Zimbabwe because her current location indicates she is in that country.