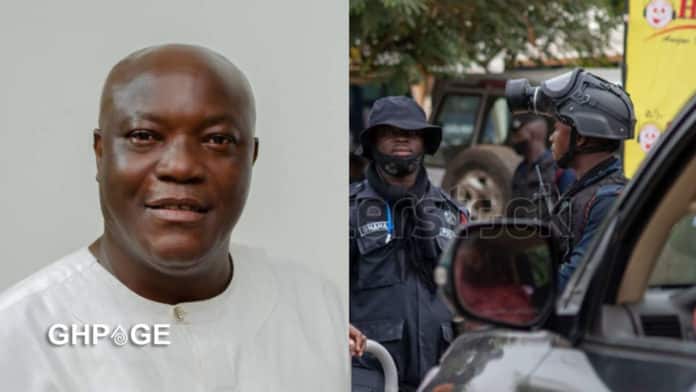 A video showing the Chief Executive of the Sekondi Takoradi Metropolitan Assembly, Abdul-Mummin Issah, hurling insults at a senior Police officer performing road check duties has surfaced in the media.

According to reports gathered, Inspector Sarfo Andrews and his team were on routine snap check at 8:30 pm around Kwesimintsim Cemetery in Takoradi when the STMA mayor driving in a Toyota Land Cruiser with registration number GE 5615-20 decided to move pass the traffic of cars waiting to go through the snap check.

The MCE is overheard angrily heaping invectives on the police officer for insisting that he joins the queue like others and wait for his turn.

“You are stupid, you ugly policeman, you say a whole police officer, you are nothing, don’t worry let him play his king kong thing, I have exercised patience for you to call whoever is coming, I could just pass by and there is nothing he can do. If I decide to pass by what else can you do? But I have been patient enough which you have called to come and take me to headquarters. I could have just drove there, go(sic) and you can do whatever you want to do tomorrow morning and it won’t get anywhere,” the MCE is overheard in the exchanges with the on-duty police officer.

The policeman who is also heard insisting on the right thing being done despite calls by the MCE to another police officer to intervene.

“…the patrol team is coming to take you to headquarters for further action; they are coming to take you for further action..I should take it for what? I am saying I have called the patrol team, your action, your behaviour, your attitude have (sic) been reported and you will be detained for this, attempting to knock a police Inspector down? You wait!”

The Police Inspector appeared unfazed by the threats of transfer from the angry MCE.