“You wanted to rape my secretary, you’ll be jailed” – Shatta wale on Deportee 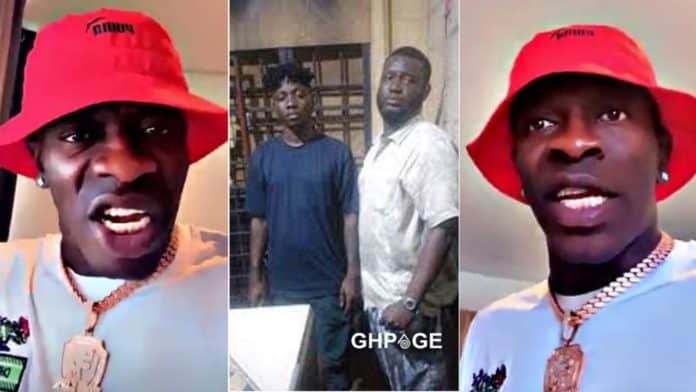 Shatta Wale has exposed his estranged confidante and friend, Deportee.

Deportee, Nana Dope, and Shatta Wale were the three accomplices who were arrested over a false prank.

Deportee had come out to narrate how Shatta Wale ill-treated them by abandoning them in prison where they were arrested for misdeed.

After their arrest, they were put before the court and later remanded in prison custody for two(2) weeks but lawyers for Shatta Wale managed to secure bail for him just after some days but Deportee and Nana Dope had to spend the two weeks behind bars.

Fast forward, Shatta Wale became a free man after the judge presiding over the case fined him Ghc 2000 for the offence stating that failure to pay would make him serve a jail term.

Read Also: Shatta Wale left us to rot in jail after everything – Deportee

Deportee who is angry over the whole thing in an interview has stated that despite serving the two weeks remand term together with Nana Dope’s efforts from Shatta Wale to get them released, they still go to court.

In a sharp response, Shatta Wale has sought to shut Deportee up by bringing up some of the skeletons in his cupboard.

According to the SM President, Deportee forced himself on his secretary in an attempt to rape her in the washroom. An unfortunate incident that he has kept from the ears and eyes of the public.

Shatta Wale maintained that since Deportee wants to destroy his reputation, he would ensure that the past incident is reported to the police for immediate redress.

He had warned the Deportee not to bite more than he could chew. In a Snapchat update, Shatta Wale intimated that Deportee must return money, land and cars he loaned out to him.

In the meantime, he wanted Deportee to keep his mouth shut or be exposed, reported to the police, and jailed.

Check out the video below…