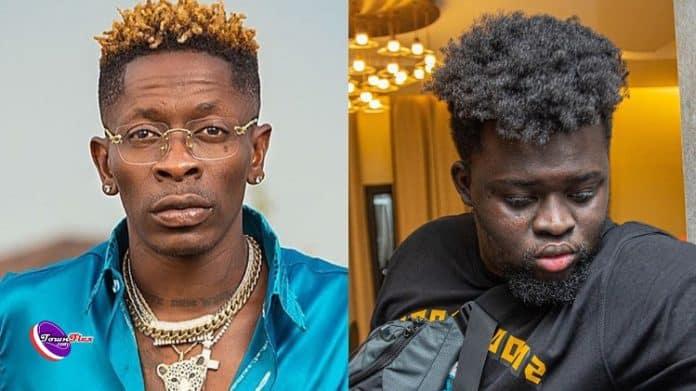 According to him, the SM President’s music career has hit a nosedive three months after he had wished him doom.

In a series of tweets aimed at Shatta Wale, MOGBeatz did not mince words when he stated that after months, he (Shatta Wale) was finding it hard to make headway with his career.

He added that Shatta Wale’s songs are lost on major streaming charts like Apple Music because he has not been able to produce hits like he used to do.

Remember, MOGBeatz had had a back and forth with Shatta Wale in not too distant past where he accused him of paying him just GH¢100. after he had painstakingly produced songs for him.

Therefore, as Shatta Wale was hitting at Nigerians and their artistes, MOGBeatz took time to remind everybody about Shatta Wale’s current music career which has hit a shipwreck.

Your man said I’ll be washed up in 3 months time back in march. Guess who’s all washed up now .. Even Apple music Ghana top 100 is playing Hide and seek with him

MOGBeatz also made a strong statement about producing Shatta Wale’s last hit song thus his followers need to be measured in attacks aimed at him.

Before you lots come on here and spew rubbish, remember I produced your superstar’s SM anthem/ Last Street hit song in 3 years

Before you lots come on here and spew rubbish, remember I produced your superstar’s SM anthem/ Last Street hit song in 3 years ?? pic.twitter.com/7KP6mAWsUl