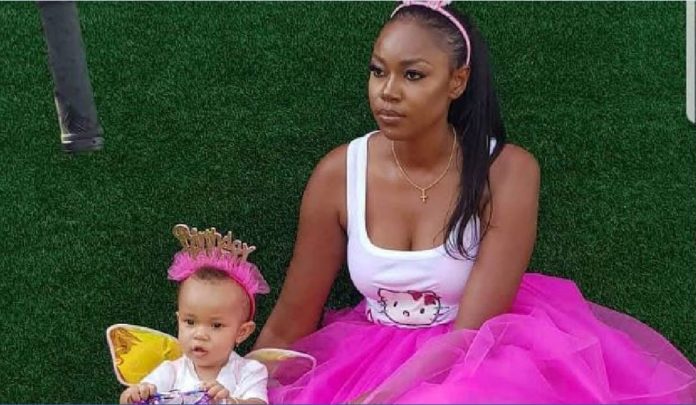 Actress Yvonne Nelson’s lovely daughter, Ryn has finally met her grandparents in the United Kingdom as her mother arranged a date for them.

In a video shared on the beautiful actress daughter, Ryn Robert’s official Instagram page, everything indicates that the young child has for the first time paid a visit to her grandparents abroad.

However, Ryn upon seeing her grandma for the first time acted remote but later appeared in a good mood after getting familiar with them.

Also, a portion of the family video captures Yvonne Nelson and her baby-daddy, Jamie Roberts also having a great time together.

Although we are not lately abreast with the current issue between the actress and her baby-daddy, their latest video suggests that everything is going smooth between them.

Well, Yvonne Nelson in her latest interview revealed that she would not hesitate to sue anyone, who speaks ill of her daughter.

Read Also: Delay tells Ghanaians when she will finally get married

According to the screen goddess, she is more aware of the insults and attacks on her personality by Ghanaians, but she won’t allow that to be extended to her daughter, Ryn Roberts, who is very dear to her heart.

Tagging her lovely daughter as an innocent girl, Yvonne revealed that anyone who will try to launch attacks on Ryn will meet her in court to justify their actions.