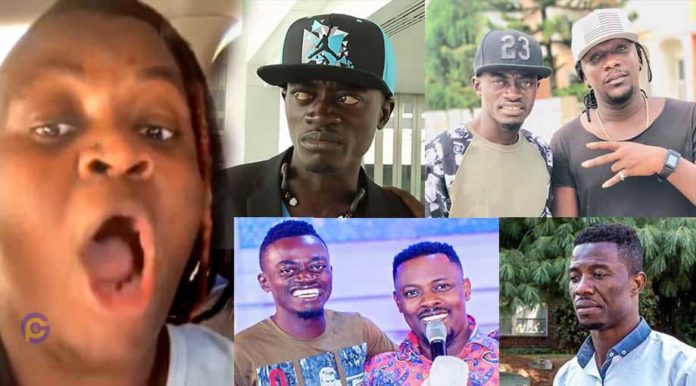 A lady believed to be the sister of Lilwin’s former manager, Zack has unleashed a barrage of attacks on Lilwin and Prophet Nigel for claiming her brother has cast a spell on the actor.

The lady identified as Aisha described Kwadwo Nkansah Lilwin as ungrateful and rained insults on him.

According to Aisha, Lilwin divorced his wife who has really supported him and went after the musician, Guru’s girlfriend.

“Lilwin, you are so ungrateful that you divorced your wife who has been with you through thick and thin and went after Guru’s girlfriend.

If you mess with me and my brother, I will reveal all your secrets. You deceived Odeyhieba and registered his song in your name, you are very greedy and ungrateful.

My brother has really helped you so don’t tarnish his image. God will punish you and that pastor who sleeps with girls in his church. Don’t dare me and don’t disrespect anybody in my family”, she angrily stated.

Aisha also used unprintable words on Nigel Gaisie and described him as a fake man of God.

A few days ago, the founder and leader of True Word Fire Prophetic Ministries, Prophet Nigel Gaisie disclosed to kumawood actor, Lilwin that his former manager Zack has cast a spell on him.

According to the man of God, Zack with the help of a spiritualist has locked Lilwin’s voice with a padlock to stop him from pursuing his music career.

Zack originally known as Abdul Razak Amissah refuted such claims and threatened to take legal action against Prophet Nigel if he doesn’t retract his statement.

He also gave the man of God a one-week ultimatum to show Ghanaians and the world where he used the black magic (juju) on Lilwin.

The former manager of Lilwin also revealed that he has been receiving death threats from the fans of Lilwin after the prophecy by Nigel Gaisie.