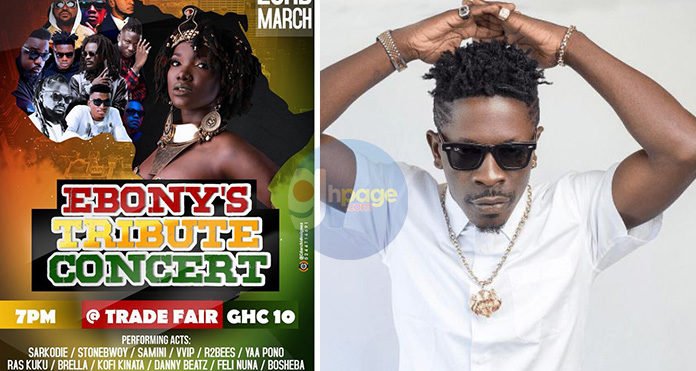 After manager of late Priscilla Opoku Kwarteng known in showbiz as Ebony Reigns revealed that the Tribute Concert which has been put together to honour the late singer nearly suffered a set back because some artists wanted to him to pay them before they mount the stage, fingers pointed at dancehall artiste, Shatta Wale.

According to Sammy Flex on Zylofon FM’s morning show, it is true that Shatta Wale will not be performing at the March 23 concert but not because organisers are not paying him.

Detailing why the Shatta Wale will be missing on the night of the event, he indicated that Shatta Wale will be out of town to shoot his first music video after signing for Zylofon Music so information that the musician real name Charles Nii Armah Mensah Jr. will not be performing at Ebony’s tribute concert because of cash is false.

Bullet, manager of Ebony later confirmed on the show that the artiste who demanded cash before performing at the tribute concert is not Shatta Wale.

Ebony’s burial service is scheduled for 24th March 2018 at the Forecourt Of the State House.

READ ALSO: Some artists are asking me to pay them before they perform at Ebony’s tribute concert-Ebony’s manager