Abeiku Santana, the veteran media personality with Okay FM has riped Nana Aba Anamoah, the broadcast journalist with GHOne TV apart over her silence with the ongoing Cardi B Chinchinga saga.

According to Abeiku Santa who spoke on live radio, it’s shocking that Nana Aba Anamoah who denigrated UTV for just inviting and hosting Big Brother Naija housemate, Tacha to be silent over the disgraced caused by female celebs in Ghana.

Abeiku Santana claims the same energy used by Nana Aba Anamoah to ask “Who is Tacha?” should be used to question who Cardi B is for Ghanaian celebrities to endured such disgrace from her.

SEE ALSO: Cardi B lits up the stage at her concert in Ghana with a stunning performance after Khebab saga (Video)

But, the harsh words from Abeiku Santana did not go down very well with the outspoken media personality who hit back.

Nana Aba Anamoah threatened to deal with Abeiku Sanatan if indeed he said those words being reported in the media. She dared Abeiku Santana to prove where she denigrated UTV or face her wrath.

SEE ALSO: List of all the female Ghanaian celebrities aka part-time Slay Queens Cardi B snubbed for a stake of Khebab (Photo)

In a series of tweets, Nana Aba wrote;

“@AbeikuSantana Kindly confirm when and where I took UTV on for bringing Tacha to Ghana. Thanks.”

“The truth is I said a whole lot yesterday about the meet and greet and hardly commented on UTV bringing Tacha. So @AbeikuSantana must tell me exactly when I dissed his network.”

“Did Abeiku really say that I dissed UTV for bringing someone to Ghana? I’d like to know when and where I did [email protected] did you really say that?Oh, nka this TL will be LIT. Kindly confirm if you opened your mouth to spew what these bloggers have been claiming.” 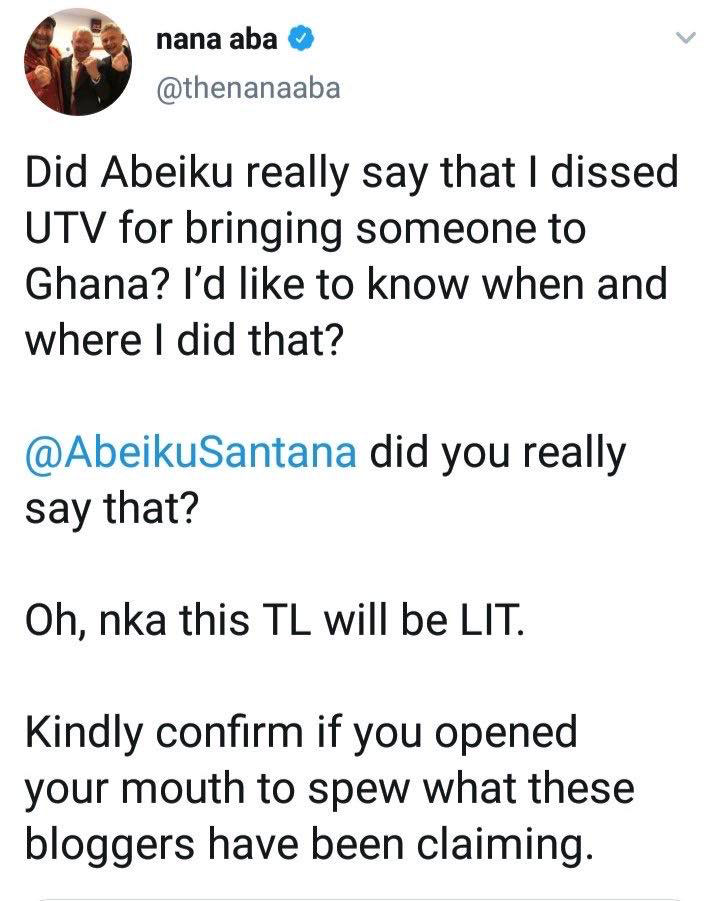 Well, the attacks and counter-attack is still going on n Twitter. Ghpage.cm is following and we will keep you updated.