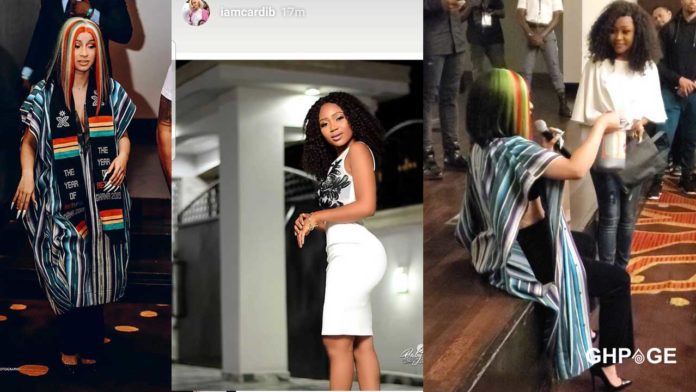 Video vixen turned actress Rosemond Brown but popularly known as Akuapem Poloo has once again become the happiest person in the country after American rapper Cardi B followed her and shared her photo on social media.

Last Sunday, Cardi B got on the bad side of Ghanaians after it emerged that the rapper had shunned some top celebrities who were invited to the Kempinski Hotel in Accra for a meet and greet session.

When the issue got hot on social media, Cardi addressed it saying it was never stated in her contract for her to meet and greet anyone in Ghana but due to how things were going she has decided to meet and greet the celebs.

The ‘Meet and Greet’ finally happened after some celebrities including Akuapem Poloo had waited for over 7 hours.

Looks like Cardi B enjoyed Akuapem Poloo’s company during the meet and greet and has stated that Poloo is her twin after following her and sharing her picture on her social media page.

Poloo who was excited seeing her picture on the Grammy winner’s handle, screenshotted it and shared it on her page with the caption.

It reads; “It just ended up in tears of Joy once again thanks @iamcardib for not looking down on me I know you’re real and real recognize real “.