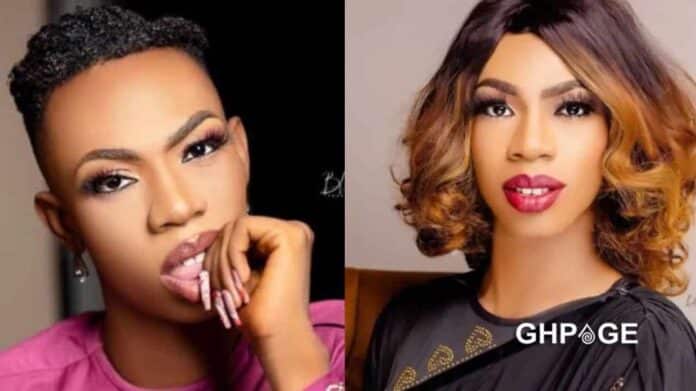 Popular Nigerian crossdresser James Brown believes every smart woman has what it takes to remain wealthy and never go broke.

According to him, “Being a woman can make one wealthy if the individual is smart enough.”

As a man who has decided to dress, behave, and look like a woman, James Brown inferred that the female gender is more lucrative than the male.

He made this revelation after sharing some photos on Instagram. A nosy fan asked why a nice gentleman like him would choose to be girlish.

“You fine as a man, I don’t know why you acting like a woman. Madman”

James Brown replied by stating that he has made a lot of money just by being a woman and believes other smart women out there must capitalize on that to make more money too.

He wrote: “Because it pays the bills naturally, Being a woman can make you wealthy if you are smart. I can teach!”

James Brown and Bobriksy are the two most popular Nigerian crossdressers. Even as men who identify as women, they have shared how they have made money for that. Both have intimated that their decision to switch genders has brought them more monetary benefits than they could ever have imagined.

Controversial Nigerian crossdresser, James Brown, has stirred reactions online after his sex video got leaked on Snapchat and later trended on other social media platforms.

Apparently, it is speculated that James just like other Nigerian entertainers, Tiwa Savage, Oxlade and Buju purposely dropped the video himself with an anonymous account just to trend.

In the leak, James Brown can be seen having sex with an unidentified lady whose face didn’t show but the same can’t be said about James Brown whose face was displayed in 4k.

In a part of the video, he can be seen thrusting his penis on the lady’s vagina walls after fully ejaculating.