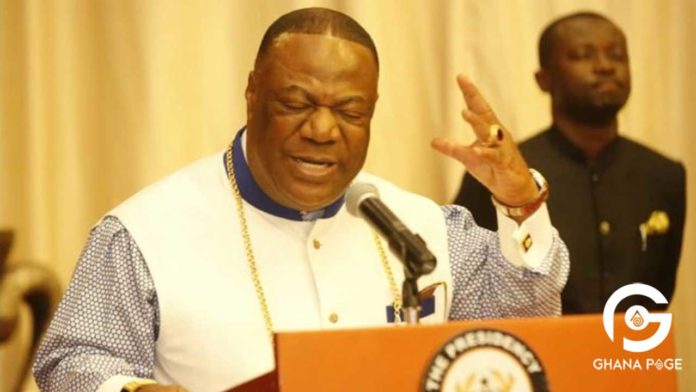 Archbishop Nicholas Duncan Williams of the Action Chapel International looks to have finally gotten the problem to why Ghanaian presidents are not able to govern well or live as to expectation.

It is a known fact that in the build-up to every election, those seeking power come out to campaign and tell the citizens their plans for the country but after they are voted into office they tend to do the opposite of all the things they promised.

But according to Archbishop Duncan Williams who some years ago was praying for the stabilization of the Ghana cedi has revealed that the inability of the past and present Presidents of Ghana to govern the country properly is as a result of an evil spirit which is controlling the Presidents.

Speaking in an interview yesterday with Metro TV’s Paul Adom-Otchere on his Good Evening Ghana show, Duncan Williams explained that as a spiritual man, he is well aware of this phenomenon and therefore appealed to Ghanaians to pray for Presidents so that we can exorcise them of the spirits.

“There’s a spiritual dimension when it comes to governance and if we’re not aware of them we’ll become victims… that unseen ruler manifests his thought – what he thinks, what he wants done and everything – through the natural ruler and it’s one of the reasons we have to pray for kings and for those in authority because our prayers will shield them from demonic influences and from powers that will compel them to take decisions and do things that will not profit the nation and profit the people,” he said.

He continued; “I have spoken to presidents who have been in office and they left office and most times you realise that there were so many things that they could have done but for whatever reasons, frustrations, the tradition, our culture did not allow them to accomplish it until they came out of office.”

As expected, he added that the said spirit can be cast out if Ghanaians go on their knees and pray to God.