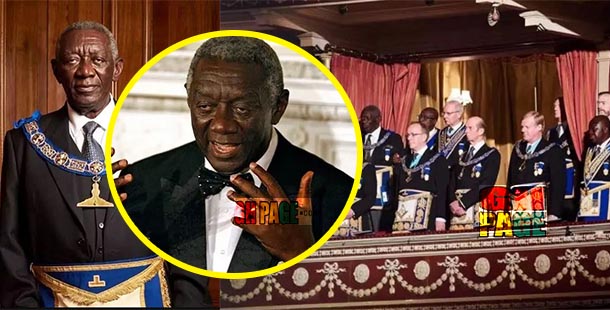 Freemason symbols including a compass and an eye seem to have spawned lots of conspiracy theories but according to the former president of Ghana, John Agyekum Kuffour, helped describe their society as a beautiful system of morality, veiled in allegory and illustrated by symbols.

In fact, the freemason society has long been seen as a secret society or cult, a group of men who have sold their souls to the devil.

However, the Ghana chapter of the society hopes to change these perceptions with the launch of a book titled “The Freemasons,”.

Nevertheless, the author of the book, Mr. Abraham Gyesie, stated that these rumors concerning freemasonry are simply not true. According to Mr. Gyesie, even plain criminals intent on duping people say they are Freemasons to escape punishment.

“If you don’t believe in God, there’s no way you can be a Freemason, pure and simple.”

“If for any reason you indicate you want to be a Freemason and you’re invited for an interview they’ll ask you, ‘In whom is your faith, do you believe in God?” He said.

“If the person responds to the question by saying, no, then the interview will stop “straightaway”.He added

READ ALSO:9 Popular Ghanaians Who Have Been Rumored As Members Of The Illuminati (Photos)

He also went on to say that whenever a Freemason meeting is convened one is not allowed to discuss politics.

Share
Facebook
Twitter
WhatsApp
Previous articleI will rather advise Ebony Reigns privately than criticize her Publicly—Kojo Antwi
Next articleAudio: ‘Will you get Ebony to sleep with her?’ – Countryman Songo fire back at those criticizing Ebony