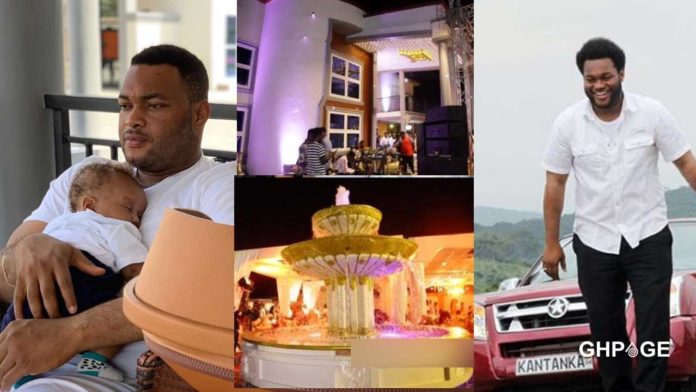 Son of the founder and leader of Kristo Asafo Ing. Apostle Kwadwo Safo identified as Kwadwo Safo Jnr, recently had a naming ceremony for his fifth child whom he also named Kwadwo Safo Kantanka Ababio.

The naming ceremony which was held in his newly built mansion was also used as an opportunity to outdoor the mansion to the guests who had traveled far and near to participate in the naming ceremony.

Sarkodie, Obrafour and Bisa K Dei were among some prominent celebrities who were present to grace Kwadwo Safo Jnr’s combined event.

Kwadwo Safo and his wife, Zainab’s, welcomed a new baby boy, their third child on August 26, 2019, and as custom would have it, they christened their son at a lavish child naming (outdooring) ceremony at his luxurious new mansion at Kwabenya, Accra.

According to a source, Kwadwo Safo Jnr reportedly splashed over GHC 5 million luxurious mansion under a year and an additional four months to ensure all the necessary and safety requirements had been guaranteed before the house-warming event.

Watch a video of his plush mansion below:

The 4-acre mansion, situated at Kwabenya in Accra boasts of an indoor water fountain, garden, and pool, bedrooms, and several bathrooms.

Kwadwo is a commercial Pilot by profession and CEO of Kantanka group of companies.