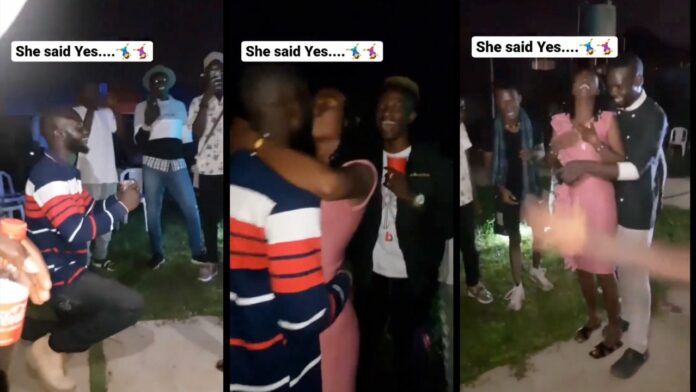 A gentleman could not deal with the fact that his ex-girlfriend was been proposed to by another man.

As a result, he created drama at the spot where friends had gathered for the proposal by tightly clutching the woman.

According to the video, the lady could not believe her eyes when her man went on his knees with a ring to propose to her.

She could not contain her joy as she became temporarily hallucinated by what was happening to her.

Right there was her ex-boyfriend, who had to seize the opportunity to show her fake affection.

As the lady leaned on him for support, he capitalised on that by going a mile to smooch and caress her.

Eventually, when the lady accepted the proposal and the ring was placed on her finger, the distraught ex-boyfriend came to hug the couple as though he was part of the relationship.

Clearly, he had not moved on and could not help himself to react to the news of his ex-girlfriend being proposed to by another man.

Many have reacted to the video by advising the gentleman not to have allowed the ex-boyfriend to get so up close with his woman.