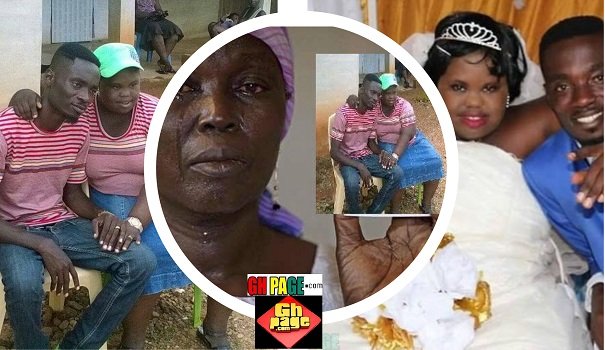 Kumawood Mmebusem’s marriage to Abena Boatemaa has become a topic of discussion again after he shared new photos with his wife suggesting—He is still happy with marriage regardless the criticisms and what most opined, he married the lady because of money.

The actor known in private life as Justice Hyms shared a new photo shoot with his wife on his social media page which again drew some attention to the couple.

And as usual, the picture went really viral and was met with several commentaries as many believed it is unreal and perhaps scenes from an upcoming movie.

READ ALSO:You will be shocked at how much top Ghanaian musicians now charge per show (Guess who topped the list)

A number of people shared the pictures with sarcastic captions such as “true love”, and all that trying to insinuate that, it was just not “right” for a clearly sane and handsome gentleman like Mmebusem to marry and “insane” or perhaps cursed lady.

However, The mother in-law of the kumawood actor, Mmebusem has lamented over the harsh comments that followed her daughter’s marriage.

The mother of Abena Boatemaa in an interview with OGEE of Dess FM was filled with sorrows when her attention was drawn to the unacceptable comments from Ghanaians concerning her daughter’s marriage to the Kumasi based actor.

In the interview, she was heard crying over the phone and queried Ghanaians if her daughter is not a human being to get married.

“I am very sad over that comments that are coming in after photos of my daughter, Abena Boatemaa’s wedding popped up on social media. In fact, I want to ask Ghanaians if my daughter is not a human being.”

“Is my daughter the only one with such an illness?” she asked tearfully

READ ALSO:These Are The Tribes Of Your Favorite Ghanaian Actresses [With Their Photos]

Listen to the interview