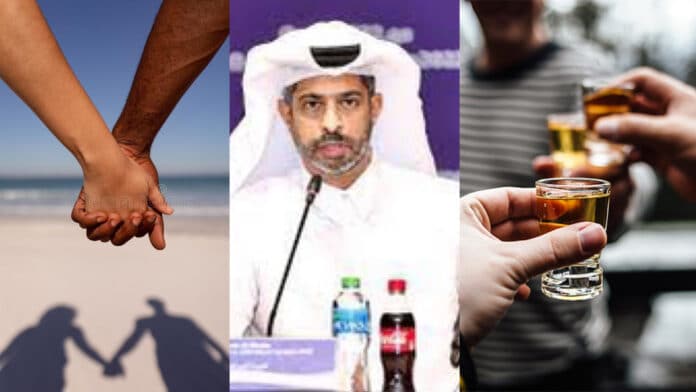 Qatar, as an Islamic state, has banned all of the forms of activities they consider immoral and contrary to its beliefs ahead of the FIFA World Cup 2022.

These activities include drinking alcohol, practising and promoting LGBTQI+, sex and even holding hands publicly.

Qatar’s Chief in charge of the World Cup has revealed the punishment that will be meted out to people who flout these rules before, during and after the Mundial.

Nasser Al Khater stated that public shows of affection will be accepted in the Gulf State when speaking to Sky’s Rob Harris.

“He said, “Look, we’ve always emphasized that everyone is welcome here.

“We only ask that visitors respect the local way of life.

“Everyone is welcome here, and when they visit Qatar, they will feel safe. Everybody.”

Many supporters are still hesitant about what they can and cannot do in the Middle East, despite Al Khater’s assurances.

Eight of the tournament’s sites will not sell alcohol to spectators, it was declared yesterday.

Additionally, there are still concerns regarding how the LGBT+ community will be received upon arrival. Josh Carvalho, the only male expert now in the field to come out as gay, stated he would be “worried” about his safety if he were to travel.

Cavallo told CNN’s Amanda Davies last month, “I personally know that if I go there, I will be protected because I’m in the public eye.”

But I’m not concerned about myself. They are the ones messaging me. People who aren’t in the spotlight are the ones that are afraid to just be themselves in public.

At the time, Al Khater did respond to the Adelaide United player’s remarks, saying that “nobody feels intimidated” in Qatar.

In a recent news conference, Gianni Infantino, the president of FIFA, supported him and criticized the Western media for its dishonest portrayal of Qatari principles.

I am European, he declared to the media. “Before imparting moral lessons, we should be making amends for what we have been doing for the past 3,000 years all across the world.