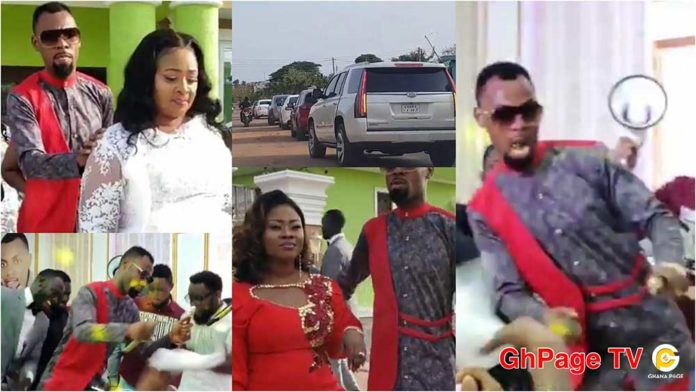 Today 6th April 2018 marks the 60th birthday of the mother of the founder and leader of Anointed Palace Chapel (APC), Reverend Obofour.

To mark the occasion, a very elaborate party was thrown for the mother, Maame Afia Pokuaa at the APC’s branch at Tema in the Greater Accra region of Ghana.

A video sighted by GHPAGE.com has detailed all that happened at the lavish ceremony.

n the video, it could be seen that Reverend Obofour’s mother donned an all-white dress and his wife, in an appealing red dress matching her husband’s dark ash and red attire — came to the church in a long convoy of expensive vehicles.

Inside the church, where the party is taking place Obofour took the stage, and together with some pastors and instrumentalist danced their heart out as they dedicated the day to his mother and honoured her accordingly.

Program emceed by Roman fada saw music performances from Gospel musician such as Brother Sammy and also was not short of stars as many Kumawood stars including such as Christiana Awuni, Wayoosi among others.

Looking at the lavish nature of the party, one may be tempted to ask why a pastor would want to be this flashy.

But coming the camp of Obofour who has come to be known for liking to be spectacular, this could be taken as normal.

Within these few years, he has been in the news on countless times for such extravagant behaviours.