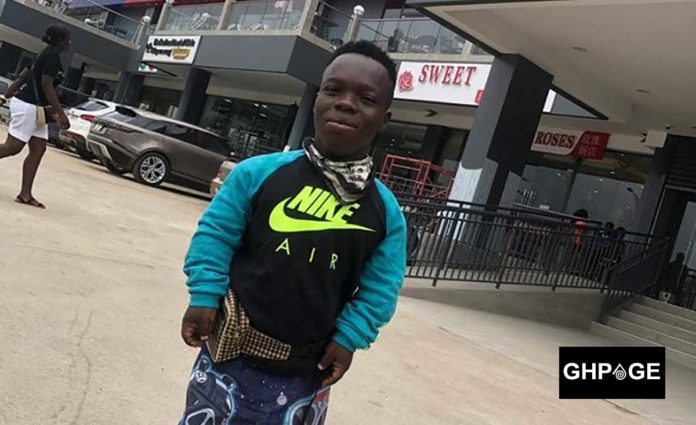 Ghpage.com has been keenly monitoring Shatta Bandle since he travelled to Nigeria on Monday 16th of September, 2019. The viral internet sensation, seems to be having an incredibly swell time in Nigeria as videos and pictures sighted by Ghpage.com indicate that the diminutive personality, has been well received in Nigeria.

Upon arrival, Shatta Bandle was approached by several persons including airport officials who wanted to shake and take a picture with the rising internet star.

He then proceeded to hangout with popular Nigerian singer, Rudeboy of the now defunct P-Square duo.

Shatta Bandle also shared a video of him challenging Nigerian entrepreneur, Aliko Dangote to come out of hiding and hangout with him after he alleged that the latter had fled the country after he was informed of Shatta Bandle’s ‘massive’ arrival.

Now a recent video posted on his Instagram account, Shatta Bandle has declared himself blind as he is blinded by the ‘extreme wealth’ he allegedly has.

“They are mad because I went and chase dangote out of Nigeria. Too much money, I can’t even see my enemies. I’m so blinded with money”

The video has since received hilarious comments from netizens. Shatta Bandle came into the limelight after he declared himself the richest man in Africa ahead of several billionaires most especially Nigeria’s Aliko Dangote.

Keep visiting our portal as we follow Shatta Bandle’s visit to Nigeria.