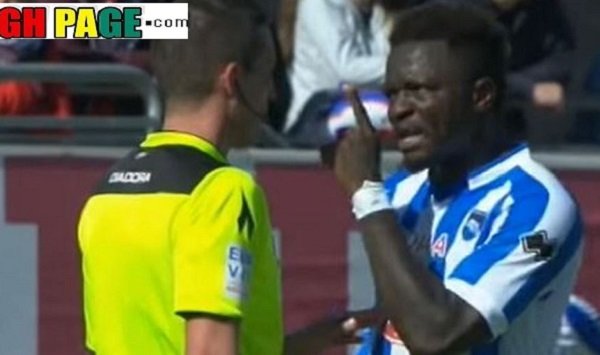 A local friendly match in Accra ends up in a chaotic manner as Sulley Muntari with his uncontrolled heart physically mounted attack on referee with a hot slap.

The controversial midfielder according to a report on Peace FM, was playing in a friendly match between two sides involving two of Ghana’s respected footballers Muntari and Laryea Kingston.

The match had to be cancelled after the player with countless disciplinary problems angrily launched a shocking physical attack on the referee.

Muntari in different ways has had several disciplinary problems with his clubs and the national team the Black Stars and has to depict the same ugly character even in a local friendly match after the referee John Terry showed him the yellow card for committing an offense.

Sulley feeling unhappy with the decision of the referee, approach the referee like an angry lion and slapped the ref in the face before grabbing the ball kicking it into the nearby houses in a shocking and disgraceful way.

READ ALSO: Afia Schwarzenegger Thrown Out From Angel TV And Here’s What Happened

After the incident, locals in the Accra suburb of Kotobabi booed the former AC Milan and Inter Milan player for launching such slap on the referee and also kicking the ball out of play for a card shown to him.

The players in shock had to calm the referee down while kids who were watching the game chanted chorus of disapproval with the elders booing Muntari.

Laryea Kingston also begged the referee not to fight back as locals chanted the match officials to go and give a fresh reply to Muntari who is negatively famous over his disciplinary behaviors.

Muntari recently drew sympathy over some racist abuse he suffered and decided to embark on street demonstration on racism but his actions in Kotobabi will certainly paint a bad picture about his conduct.

“There was a small infringement which I didn’t see earlier so I stopped the game and decided to replay it as fair-play in favor of Sulley’s side,”  referee John Terry narrates what happened.

READ ALSO: “Sarkodie& Stonebwoy are rude to their fans, they have forgotten who made them”-Shatta

“Unfortunately he (Sulley) grabbed the ball with his two hands and I gave him a yellow card for that on the field of play. He was not pleased and came straight to slap my face and I showed him a red card and he took the ball and played it out of the field of play.

“I was surprised and the players around couldn’t do anything since all were similarly surprised too.

“When that happened, players of both sides talked to me not to retaliate and forget. Laryea Kingston spoke to me to let things go and at that moment I let go.” the referee added.

Speaking about Muntari’s years ago similar actions, he was sacked in disgrace at the 2014 World Cup for attacking a management member of the Ghana national team at the tournament in Brazil.

Also, he was thrown out of Ghana’s team at the Olympic Games in Athens for exhibiting disciplinary towards team-mates and opponents.