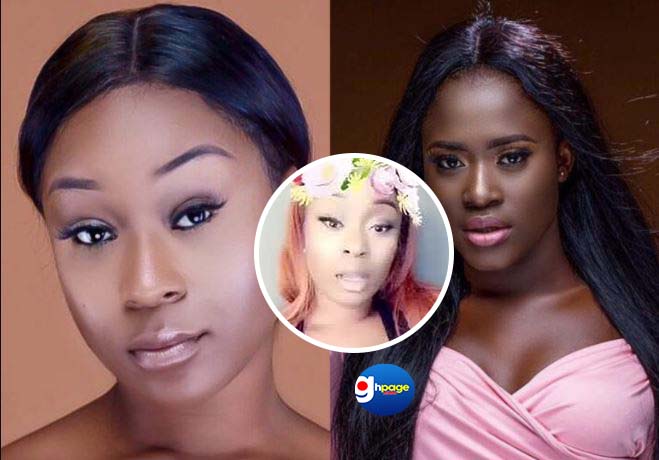 The feud between Efia Odo and Fella Makafui started when Efia Odo claimed Fella is a cheap girl who sleeps with politicians and other rich men in society for money and other material stuff. She even alleged Fella Makafui, the YOLO star actress has slept with Ghanaian rapper, Medikal, Sister Debby’s boyfriend and she is equally fake including her big butt.

In her defence, Fella Makafui on Snapchat revealed that Ghanaians should ignore Efia Odo because although she looks old, she has the brain of a child so people should not take her seriously.

However, from nowhere, Sista Afia, the Jeje hitmaker has jumped to the defence of the young actress, Fella Makafui. Throwing shades at the US-based Ghanaian actress, Efia Odo, the singer accused her of sleeping with every man she encounters. She also alleged Efia Odo is a thief who recently stole GH400 from one of her boyfriends she recently visited.

People have been asking how the fight between Fella Makafui and Andrea Owusu popularly known as Efia Odo started. Well, Ghpage.com has all the gist. And here it is.

Not long ago, Fella working at her wine shop in East Legon took a picture and posted on Instagram and in the caption she advised ladies to work hard and stop begging men for Mobile Money. Efia claims that post was an insult to her fans and other women because she is not working hard but fvcking her way to the top.

READ THIS: After denying their affair, a video of Kalybos ki$$ing Jacinta has been l.eaked [Watch]

Again, Ever since Ebony Reigns died, Fella has been using her picture as profile picture on her social media handles and she has been making statements that go to imply they were the best of friends, But according to Efia Odo, this was never true because Fella actually hated Ebony and she is just being a hypocrite and she (Efia Odo) has to let everyone know who Fella Makafui really is.

But finally, Efia Odo has called for peace to reign and allow love to lead as this feud will benefit them nothing. In a video posted by the ‘Heels and Sneakers’ actress, she apologized to Fella Makafui for all the insults and false spoken statement aimed at damaging her image.

She posted the video with the caption:

“When you’re a new creation old things have passed and new things are embedded in you. If you love God you love a fellow brethren how can you love God and hate a brethren. Fights and mishaps happen but that should never allow you to publicly humiliate another individual even if you are as angry as a lion”.

“No one is perfect but we can strive to be perfect as our creator because he created us in his image and if his image is perfection then why are we not? Striving to be righteous is all I want to do in this world of sin. Worshipping God is not just about bowing down and praying or going to church or reading the word of God but it’s about how you treat your fellow brother or sister @fellamakafui I’m sorry my sister for the pain u caused you with my slander”, she added.