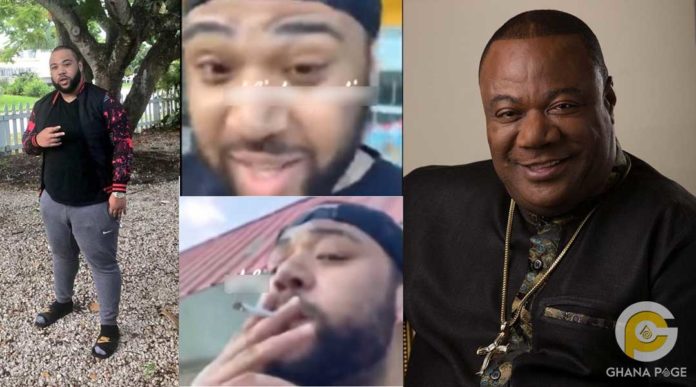 One cannot mention the name of some of Ghana’s most respected men of God without mentioning the name of the founder and leader of Action Chapel Nicholas Duncan Williams.

A new video sighted by Ghpage.com on social media sees the son of the renowned preacher known as Daniel Duncan-Williams smoking weed heavily and this has made social media users question why the son of a famous preacher can just go way-ward whiles his dad is preaching against this bad practices.

According to sources, Daniel was just released from prison after serving a three(3) years jail term for a crime yet-to-be-known.

In his latest tweet, he revealed that for the past three(3)years he has been celebrating his birthdays in hospitals while he was still serving his jail term.

In the video which has since gone viral, Daniel was seen smoking heavily on using swear words and also ranting on his dad.

The veteran Ghanaian media personality, Otwinoko has finally spoken after Prophet Emmanuel Badu Kobi named him as a witness in his son’s...
Read more
Lifestyle

It is our hope to be at peace with everyone. Yet, anger is causing a lot of destruction and problems in our...
Read more
Lifestyle

A Roman father in Jamasi-Yonso in the Ashanti Region of Ghana has made history but sadly he did not live to witness the ‘fruit...
Read more