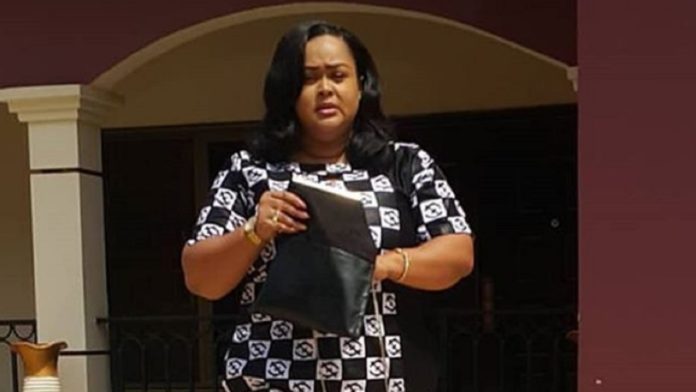 Popular Kumawood actress Vivian Jill Lawrence has rained curses on a lady who claimed to be her friend for accusing her (Vivian Jill) of buying sperms for 5000 euros.

In audio chanced upon by Ghpage.com, the actress who sounded very furious cursed her supposed friend identified as Ama Mary for fabricating stories about her.

Vivian Jill in a phone conversation with Ama confronted her on why she claims they are friends when they have never met or had any conversation before.

According to Vivian Jill, she will never forgive her for disgracing her in such a manner and that if she doesn’t retract her statement, death will befall her family.

In reacting to this Ama explained that her aim was to defend and protect the actress over the accusation made by Evangelist Addai.

Ama Mary further revealed that she was paid 500 euros to fabricate such stories against the actress and begged for forgiveness.

It can be recalled that US-based Evangelist, Kwame Addai claimed that Vivian Jill’s first son, Clinton is the father of her second son Alfie.

The actress, in turn, denied all these allegations and hurled curses and insults at Evangelist Addai.

However, after all these brouhaha, a lady identified as Ama Mary in an interview with Oman Tv revealed that she is a very good friend of Vivian Jill.

She explained that Vivian Jill doesn’t have a husband and that the actress went into a contract with a man from Germany to sell his sperms for 5000 euros.

This she claims is how Vivian Jill had her second child, Alfie.