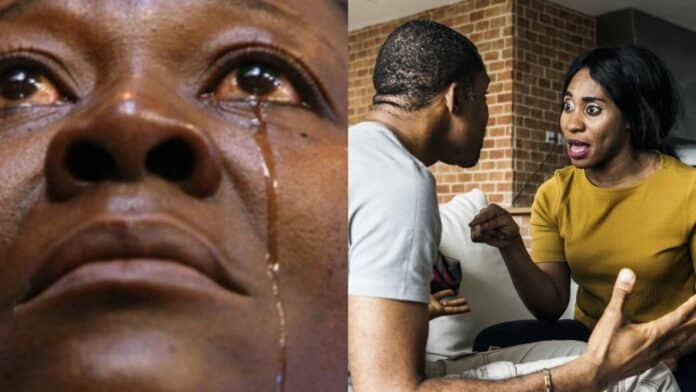 A woman ended her marriage to her husband after 14 years of being together, only for her to be dumped by her new man.

A quick plot twist, Amanda Trenbfiled is currently left with no man when he thought she was leaving a bad marriage to start a perfect one.

Following reports that she had left her spouse of 14 years for her “soulmate” because they had “electric” chemistry, Amanda Trenfield gained notoriety on social media.

She was shocked, though, when the man, Jason, rejected her overtures after she confessed her affection for him, leaving her alone.

In an interview with Moa Freedman on the “No Filter” Podcast, Amanda has since discussed her choice and described how it all came about.

She claims that she met Jason while she and her husband were on vacation in an effort to rekindle their marriage. Jason spoke with her and her spouse over dinner and later invited them out for drinks.

Read Also: Woman files for divorce because husband is too kind and does not maltreat her

“It happened to be my favourite rose. And during the course of that evening, we just stayed talking – there was a depth of connection I just hadn’t felt before.”

“We enjoyed a body-hugging embrace where I whispered into his ear, ‘This isn’t over, I need to see you again.’ He put his hands tightly on my waist and pulled me close. ‘Yes,’ he replied. It was all I needed to hear.

The following day, Amanda approached Jason and expressed her feelings for him, and they shared a quick kiss.

“I opened the conversation with, ‘I felt strange and very connected to you last night’, and he said he felt the same way.

“He was there in those moments and felt the connection like I did. He felt the kiss like I did. But he decided to say no and move forward with his life without looking back,” she said.

Speaking on his rejection, Amanda said she has no regrets even though her life has changed completely.

She has now written a memoir about the experience titled, “When A Soulmate Says No”.