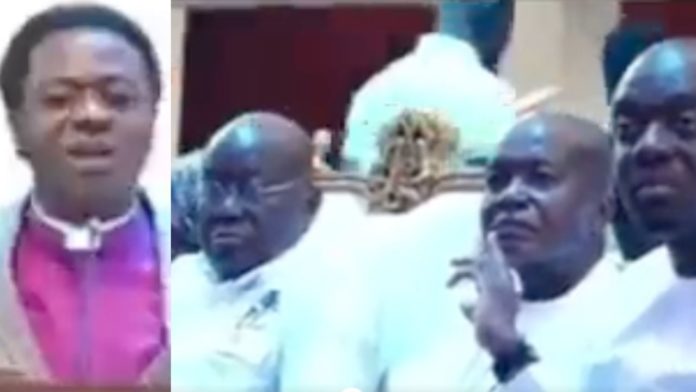 The facial expressions of President Nana Akufo-Addo and the NPP changed instantly when a preacher described their governance as a failure.

The former Chairman of the Christ Apostolic Church did not mince words when he spoke directly to the powers that be and asked them to clean their house.

According to him, if the NPP claims they have the men, it needs to reveal itself in how they govern the country.

Based on all the poor economic figures and hardship, the preacher intimated that the NPP needs to reassess itself, unite and ensure that they deliver the goods they promised Ghanaians.

“NPP party talks about we have the men. If you have the men without unity, you don’t have the mind. Because the men are there and they’re not united, they will not give you their brains. The party will differ, and the nation will suffer. If the nation fails, you have failed,” he preached

These words did not solicit the right facial expressions from the president and some bigwigs of the party at the event.

In fact, the preacher went on to say, “I believe you called the wrong person to speak today.”

He went on to chastise the government by using euphemisms to describe the porous nature of the country and how almost everything has degenerated.

Check out video below…