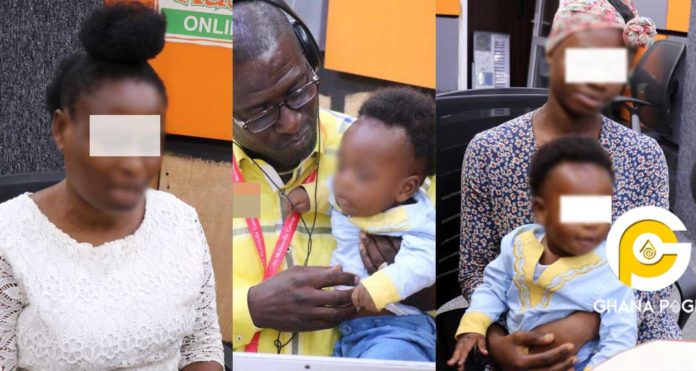 Do you remember the blind lady who raped by an unknown man in 2018 who was later found out not just pregnant but had been infected with HIV? she had given birth and named the child (a son) after Captain Smart of Adom FM.

The 44-year-old Laila (pseudo name) became a topic for discussion in Ghana after Captain Smart who had heard the woman’s plight invited her to his studio to share her story.

Laila explained that she was not born visually impaired but rather got blind at the age of 11. It was an eye infection which is known in local parlance as “Apolo” which got her blind.

SEE ALSO: Here are the top 6 musicians in Ghana according to Ursula Owusu

In the middle of 2018, an unknown man broke into her kiosk and raped her resulting in her pregnancy. It was also discovered that she has been infected with HIV as a result of the rape.

Captain Smart then led a campaign to raise funds to take care of Laila. People bought into her story and the message from Captain Smart and donated heavily for her. Captain Smart got her a befitting place to live and made life comfortable for her with the money raised.

Again, Captain Smart made sure Laila’s daughter got into a nursing training school to fulfill her dream of becoming a nurse.

It is as a result of that kind gesture that Laila has named her newborn son, Kwame after the host of Adom FM morning show, Captain Smart.

In the Studios of Adom FM to present the son to Captain Smart, Laila revealed that at a point in her life she contemplated committing suicide but God sent the journalist to her life who changed her life.

“I considered taking my life because all hope was lost but when Adom FM came in, everything changed for the better,” she said.

SEE ALSO: Patapaa will soon be the king of the music Industry – Captain Smart

Very happy Laila also used the opportunity to thank God, Adom FM, Captain Smart and everyone who donated to help her in her time of need.