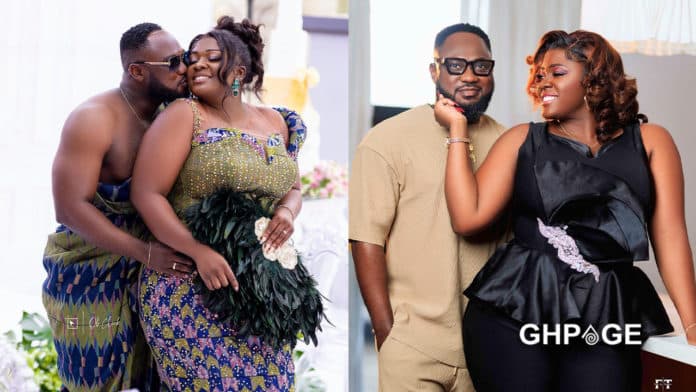 The wedding between Tracey Boakye and her husband Frank Badu Ntiamoah has been the fulcrum driving all the attention on social media.

The private ceremony which was strictly by invitation happened Thursday 28 July 2022, at Kumasi in the Ashanti Region with only close circles of the couple in attendance.

The wedding kicked off early in the morning with the traditional session witnessed by families of the couple and a handful of guests which was preceded by the white wedding later in the day.

First photos from the much-publicised green-themed nuptials have already surfaced and it shows the actress and her husband looking stunning.

Clad in a gorgeous traditional bridal dress made of green and blue patterned Kente, Tracey Boakye looked all smiles as she posed for the camera with her husband.

Check out the first set of pictures from the wedding below

Henceforth, Tracey Boakye — who touts herself as East Legon Landlady — will now officially be addressed as Mrs. Tracey Badu Ntiamoah.

Congratulations to the couple!