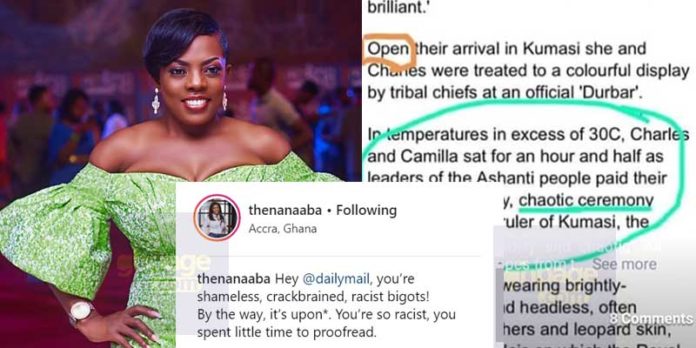 Renowned Newscaster, Nana Aba Anamoah of GhOne has descended heavily on Daily Mail, for making a racist report upon Prince Charles’visit to Ghana.

On Saturday, the Prince and Dutchess visited Kumasi to meet His Majesty Otumfuo Osei Tutu II the Ashantehene at the Manhyia Palace and attended a traditional procession with the Ashantehene and local chiefs but in UK DailyMail’s report, they referred to the respect paid the Prince by the Ashanti’s as noisy and chaos ceremony.

This infuriated Nana Aba who quickly took her Instagram page and shaded the broadcasting company for putting up such report. In her post, she spotted a spelling mistake made by the DailyMail and called them shameless, crackbrained, racist bigots.

“Hey @dailymail, you’re shameless, crackbrained, racist bigots!
By the way, it’s upon*. You’re so racist, you spent little time to proofread,” she wrote on her Instagram page.

The Prince of Wales Prince Charles and the Duchess of Cornwall Camilla touched down in Ghana for their four-day official visit to the West African country.

The two were met at the airport by the Speaker of Parliament Prof. Mike Ocquaye and other top Ghanaian government officials.

The British Royals visit to Ghana is part of a tour of West Africa. Prince Charles of Wales’ first visited Ghana since 1977.