Nayas reacts to fight with Pamela over boyfriend snatching allegations 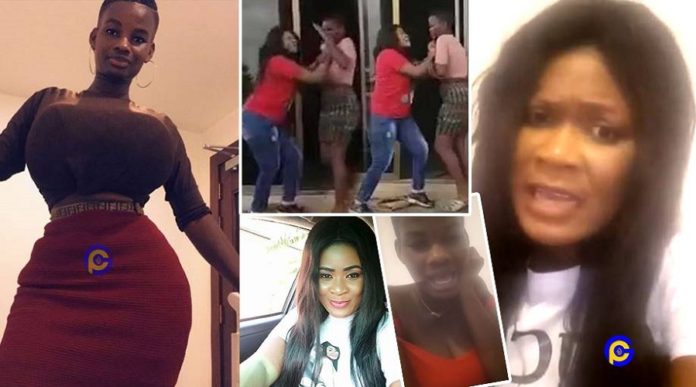 Kumawood actress and producer, Gladys Boaku popularly known as Nayas has finally reacted to the viral video where she attacked video vixen and Instagram model, Pamela Odame Watara for snatching her boyfriend.

According to the controversial actress, it was a scene from a movie they are shooting and that she wouldn’t stoop low to do such a disgraceful thing.

“I have received several calls over this issue. I will never do such a thing to disgrace myself, it was a movie.

Pamela is my younger sister and there is no way I will fight with her over a boy. It was a movie we were shooting and there were many people at the location so I don’t understand how people can make such conclusions.

I am so confused, I can never do such a thing”, the controversial kumawood actress disclosed.

Nayas further reiterated that it was a movie and pleaded with her fans and followers to forgive her.

Prior to this reaction by Nayas, Pamela granted an interview which she disclosed that she was really attacked by the actress for snatching her boyfriend.

She later took to social media to rain insults on the actress claiming she has a smelly armpit and rashes on her butt.

Well, some Ghanaians have come to the conclusion that this was a ploy by the two ladies to gain attention.