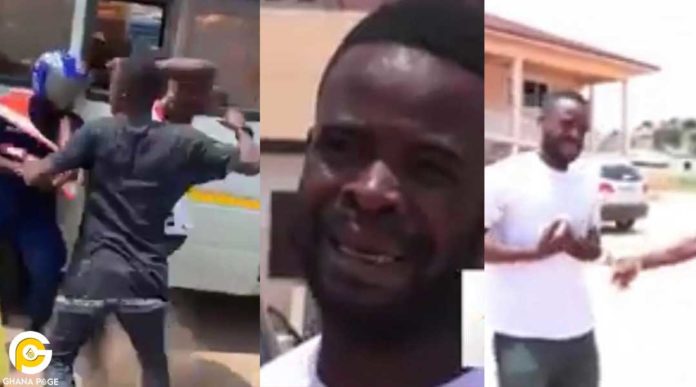 The commercial driver and his mate who gave a policeman with the Odorkor Police station the beatings of his life are pleading with the authorities for forgiveness.

In a video sighted by Ghanapage.com, the driver and his mates were seen in handcuffs shedding tears and begging for forgiveness.

In the video, the driver is heard saying amid tears; “What have I done? What sin have I committed? Your life becomes miserable if you do not have anyone to defend you in Ghana”

ALSO READ: Policeman who was beaten up by trotro drivers and mates speaks

The Policeman with the Odorkor Police station was on Thursday 14th March 2019 viciously assaulted by some commercial drivers and their mates.

In a video that went viral, the policeman received the beatings of his life as bystanders also stood in amazement.

According to the Policeman, he confronted the driver who was driving recklessly and almost run him over which started with a heated argument and ended up in a physical fight.

This attack on the policeman has received condemnation from a cross section of the public and others also pleading with authorities to bring the offenders to book.