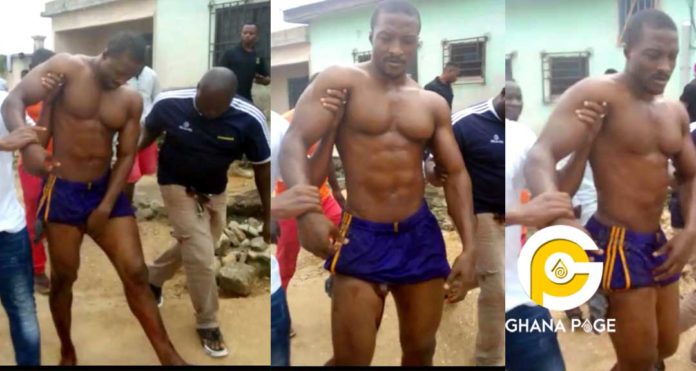 Reports reaching Ghpage.com has it that the NDC Hawk vigilant group member, ‘West’ who survived the brutal gunshot at the party’s regional Headquarters in Kumasi in February 2019 has stormed the hiding place of his attacker, ‘Akon’ and has stabbed him multiple times with a knife

According to the reports, West found out his assailant has returned from his previous hideout after the shooting and was currently hiding at his house. He organized a group of his gang and they stormed Akon’s house, dragged him out of his house and stabbed him multiple times.

The police quickly swooped in and took custody of the Akon born Hussein Sulemana to avoid more bloodshed from the two groups of gangs who also operate as NDC security team and members of the Hawk vigilante group associated with the opposition NDC.

WHEN THE GANG CAME FOR AKON

Samira Suleman a sister of Akon who was present during the assault narrated how 20 machomen surrounded their house located at Kenyasi Abirem and demanded they hand over Akon.

The sister of the alleged gunman revealed they had no idea Akon was hiding in the house since he fled when the police declared him wanted following his alleged activities in the shooting fo some men at the NDC headquarters in Ashanti Region in February leading to the death of one man.

“We didn’t know my brother had come and was hiding in his room; he had refused to answer his phone so we had not known his whereabouts since the police declared him wanted in connection with the murder of Abdul Wasiu”, Samira said in an interview on Angel FM.

Samira Suleman added that as she speaks, the family does not know the whereabouts of Akon and they do not “trust the police”. According to the woman, West has bragged that even if he is arrested, the Ashanti Regional Chairman of the NDC, Augustus Andrews would “go to their rescue even if they were arrested”.

But, the financier and chairman of the Hawk vigilante group, Joseph Yammon claims Akon is not the person who shot West so this revenge attack comes as shock to him. Ghpage.com has gathered Akon is currently at the Komfo Anokye Teaching Hospital in Kumasi.