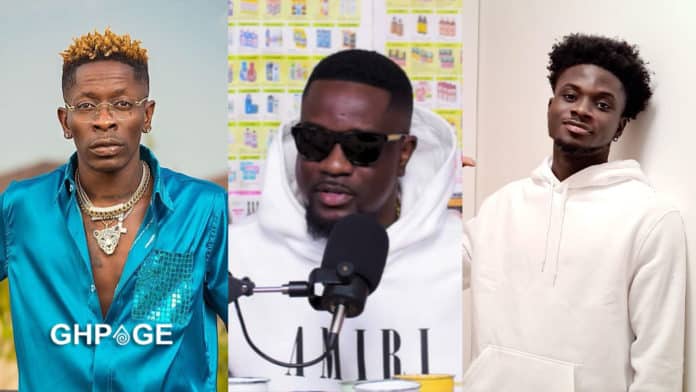 Despite coming under an avalanche of attacks from Shatta Wale, rapper Sarkodie has eulogised the dancehall musician as one of his favourite artistes in Ghana.

The BET award winner was speaking on ‘Podcast and Chill’, a South African podcast hosted by MacG, when he admitted that Shatta Wale is a troublemaker in the music industry albeit the artiste he loves to hate.

READ MORE: Sarkodie reveals why he doesn’t show off his philanthropy works

Asked to pick his favourite between him and Kuami Eugene, Sarkodie said even though Shatta Wale often lambasts him for no reason, he would put his bet on the ‘Kakai’ hitmaker.

He explained: “Shatta Wale is crazy but that’s somebody that brought energy into the industry as much as we thought we were being mad. He insults me for no reason. We will be on the phone today and tomorrow he is up on the radio f—k Sark.”

“Sometimes you don’t understand it but I think he brought energy and attention to the industry. But the two are so far apart because Eugene is very new and usually and he knows I’m his biggest fan. Just for the game, Eugene will go.”

Sarkodie also spoke about Shatta Wale’s collaboration with Beyonce on the Lion King album. He told MacG that Beyonce knew him long before she met Shatta Wale.

According to him, he met Beyonce in 2012 at one of the many BET ceremonies he attended and they exchanged pleasantries briefly.