Stonebwoy's wife, Dr Louisa Ansong was captured dancing her heart out at the just-ended Ashaiman to the World Concert when her favourite song on the EOM album was performed by her husband 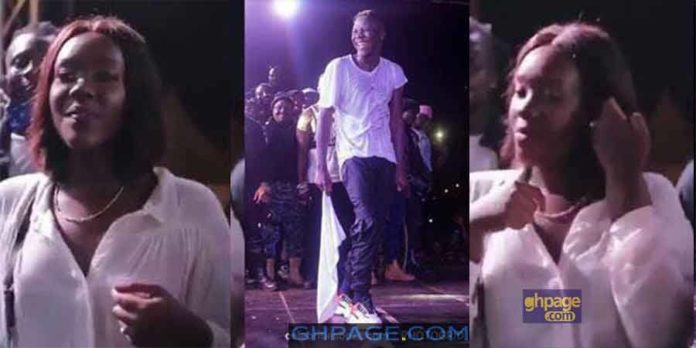 Dr Louisa Ansong, wife of Reggae/Dancehall artiste, Stonebwoy as we see her can be deemed the perfect partner for Stonebwoy; her supports at events has always been great.

Last year, minutes before Stonebwoy hit the stage to deliver his usual spectacular performance, he was attacked with a knife which missed him narrowly but unfortunately, the wife got cut at her backside but still, Dr Louisa was there this year to show massive support for her husband.

Ghpage.com has sighted a video of Dr Louisa dancing her heart out at the just-ended Ashaiman to the World Concert when her husband took on stage to perform her favourite song on the Epistle of Mama album.

It could be recalled that a video of the two popped up some months ago where her husband questioned her of her favourite song on his album which she didn’t hesitate to mention suit and tie.

She explained that it is her favourite song because it is very practical, deep and real.

Read also: Dr.Louisa’s Message To Stonebwoy On Their One Year Wedding Anniversary

In a quick reaction, Stonebwoy said she seems to have chosen that because she lives in the ‘corporate and the white color job setting’ which she quickly replied in pidgin English, “Me I dey which corporate, Me I be gangster .. you know no say,me I be gangster. I be hustler.” Watch that video here.

The marriage has since produced one beautiful daughter they have named Catherine-Jidula Tumin Satekla which he named after his late mother.

Read this too: Stonebwoy And Wife Release Photos To Mark One Year Wedding Anniversary