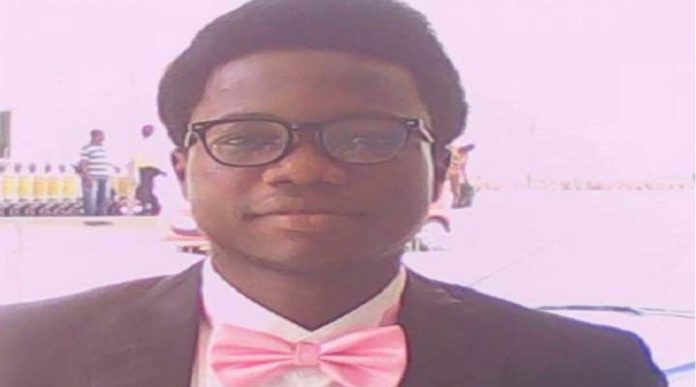 Popular Ghanaian prophet known as Prophet Cosmos Walker Affran has stated that the chaos that happened on the night of the VGMA was going to be a national disaster if not for his timely intervention.

According to the prophet, he arrested some demons which were imported into Ghana by Rev Owusu Bempah from hell to cause a stampede at the event.

He added that Rev Owusu Bempah imported the demons to aid the ruling New Patriotic Pary (NPP) to fulfil their campaign promise and also cause a lot of bloodsheds.

Prophet Cosmos Walker disclosed that he has the demons in his custody and will spiritually deport them to hell if Rev Owusu Bempah fails to do so.

He wrote this on his Facebook page; “Ghana would have been in a state of mourning, if I had not stop the demon been imported into Ghana from Hell by Prophet Owusu Bampah, what happened at Vgma was the plan of the demon to cause national disaster through stampe in the event to claim lives and human blood he wanted from npp government, like what happened “may 9 football match ” which a lot of people lost their lives through stampe, God show to me what Prophet Owusu Bampah and npp government have done which will take innocent lives, so when God showed to me what is going to happen at vgma, I decided to stop the demon to cause stampe in the event through confusion and if I had stated clearly in my early posts which I made last weekend about the plan of this demon towards the vgma, people will not patronise the vgma show and I have ended up destroying some one awards show, which they have invested millions into the event so I decided to do some spiritual work stop the national disaster which the demon would have caused. and that why I posted it on my page last weekend. Still the demon is in my spiritual custody and am not ready to release the demon because if I do something bad which is national disaster will happen to Ghana and human blood will be taken by this demon, so am still waiting for Prophet Owusu Bampah to come and spiritually hand over this demon to him and so he can return the demon to Hell where he brought the demon from and since I have given him time, If he refuses then I will deport the demon to Hell again by myself, Ghana is not ready for this evil act. God is the Greatest”. 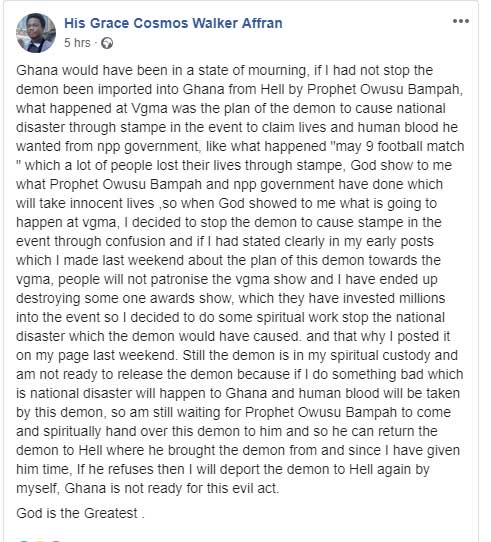 Prophet Cosmos Walker Affran is popularly known for predicting the Ethiopian plane crash that claimed the lives of over 150 people.

He also recently predicted the disappearance of newborn babies across the hospitals in the country.