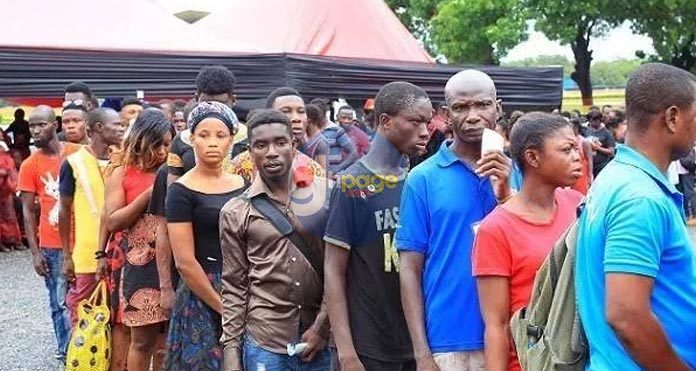 The singer who was involved in an accident earlier this year was finally sent off after a burial service was held at the forecourt of the state house yesterday.

Family and loved ones turned up in their numbers amidst the heavy downpour to pay their last respect to the songstress.

While thousands of sympathizers mourn and pay their last their respect to dancehall diva, Ebony Reigns, others had their own agenda.

A young man who pretended to be one of the grievers narrowly escaped lynching after he was caught trying to pick-pocket others busily mourning the late ‘Maame Hwe’ hitmaker.

But for the heavy security presence at the funeral grounds, the young man would have suffered what has come be known as a ‘mob justice’.

READ THIS: 7 Ghanaian Celebrity Kids Who Are Not Yet 20yrs Old But Are Making Ghana Proud

The police who quickly came to the alleged thief’s rescue hand-cuffed him and took him to the police station for questioning.

Ghanaian celebrities were present in their numbers to pay their last respect to the young lady who is regarded as the most talented female singer Ghana has ever had in recent years.

READ THIS TOO: Video: The Heartbreaking Moment When Ebony’s Parents Paid Their Last Respect To Their Daughter