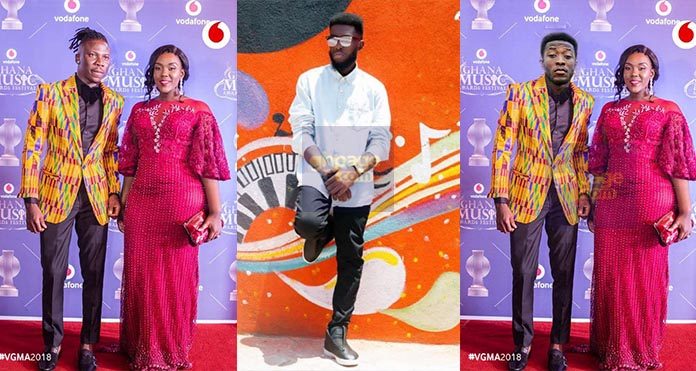 Maybe Stonebwoy should get some more security around his wife, Louisa because some boys have already started crushing on her and new artiste Derrick Nana Asamoah, aka DNA is crushing on the wife of Stonebwoy. The up and coming rapper, popularly known as Hotboy DNA earlier posted that, he just wanted someone to photoshop him standing by the wife of Stonebwoy because he should be the right person standing by such a beauty.

Just as he requested, he got it and someone sent him the photoshopped version of the picture by taking off Stonebwoy’s head and replacing it with his and that’s the result you see below—And they look kinda perfect or? LOL

Well, those are only dreams, Hotboy DNA can dream when he’s asleep if he’s really serious about it but the internet cannot stop admiring him–Maybe we should look for a Louisa look-alike for him.

Hotboy DNA is an amazing rapper with a great sense of humour so we know he was just kidding. Recently he dropped his first music video titled ‘DEVIL’ and watching the video will make you admire him more and add him to your lists of artists to follow.

You think we are kidding? Take a minute to watch his ‘DEVIL music video below:

READ ALSO: S£x Scandal: Akosua Sika, The Slay Queen Who Was Beaten By Sharon Gh Lands In Trouble Again As A Video Of Her Being Chopped By Two Guys Leak

And that’s the picture he posted below—So daring huh? Have a sister who has a shape like Louisa? Help us link her up to Hotboy DNA…. Love the story? SHARE it with friends now on Facebook.

Love His Music as well? Or Want to tell him your mind? Follow Him on Facebook by clicking here

READ ALSO: Video: Angel Obinim caught removing a passport from his shoe during a miracle service in his church