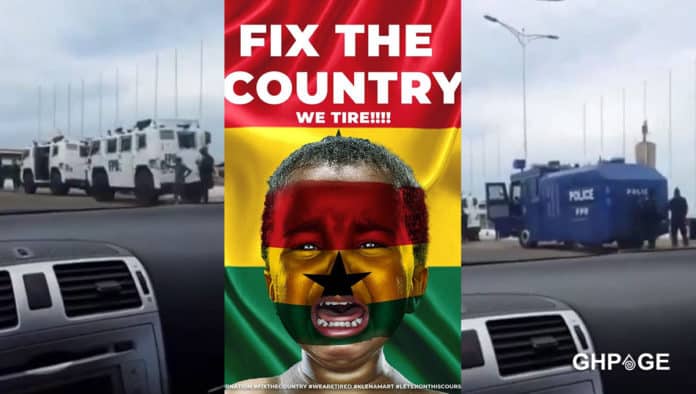 The Ghana Police Service early Sunday moved to thwart a planned demonstration by conveners of the social media movement #FixTheCountry.

The group, made up of Ghanaians who are unhappy with what they call the economic hardship in the country, declared their intention to protest on Sunday, May 9, 2021. But the Ghana Police Service secured an injunction against the protest.

However, some online protesters vowed to defy the court order and go ahead with the match as planned.

In anticipation of this, the Police were deployed to Independence Square where the protesters would have assembled with amoured vehicles, hot water cannon trucks among others.

The court ruled that the planned demonstration is prohibited until the restriction on public gathering is lifted.

But Oliver Barker-Vormawor, a convener for the movement, has said the group will head to court to appeal the injunction stopping their planned protest.

He further indicated that the group will “employ all lawful means to overturn the verdict of the court.”

The group cited ‘dumsor’, unemployment and poor healthcare systems as proof of successive governments’ mismanagement of the country.