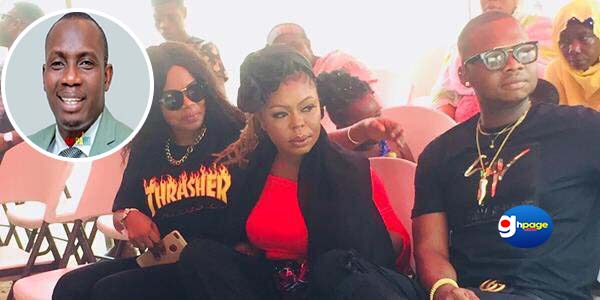 Afia Schwarzenegger and Mzbel together with actor Nana Tornado went to the family house of the family of late Ebony Reigns.

They took their turn to commiserate with the family of late dancehall songstress, Ebony Reigns born Priscilla Opoku-Kwarteng.

Afia Schwarzennegar addressing Ebony’s family urged them not to tolerate anyone who spoke ill about their daughter.

According to Valentina Nana Agyeiwaa, well known by the name, Afia Schwarzenegger added that there is no manual on how to cater for a child — urged them to start suing some people who had already made allegations about the singer after her death.

Afia cited the example of Counselor Lutterodt who made some scathing comments about Ebony and questioned the family why they allowed ‘that man’ who spoke nonsense about their daughter to even get near their house.

Afia Schwarzenegger who at a point of her address was seen weeping and boiling with anger added that some allegations had been made by Prophet Nigel Gaisie over the sexual life of the dancehall act and encouraged father of Ebony to look for that particular video and press charges to redeem her daughter’s image.

READ ALSO:Woman Says She Saw Ebony’s Ghost At Where The Accident Happened And Ebony Sent Her A Message To Ghanaians(Audio)

The self styled queen of comedy advised the bereaved family to look for evidence that would implicate anyone who smeared Ebony’s personality with falsehood and take those people on legally.

Ebony Reigns died in a gory accident on the Sunyani-Kumasi road on the 8th of February,2018 while returning to Accra from Abesim, Sunyani. Her friend Franky Kuri and one air force officer Francis Atsu Vondee, who posed as a bodyguard also died in the car crash leaving the only surviving driver.

Other Ghanaian celebrities such as John Dumelo, James Gardiner, Beverly Afaglo, Stonebwoy, veteran actor Ajos and Victoria Lebene Mekpah have all went to pay their tribute to the bereaved family.

Also,Ebony speaks about how female artists in the music industry hated her before her death(Video)