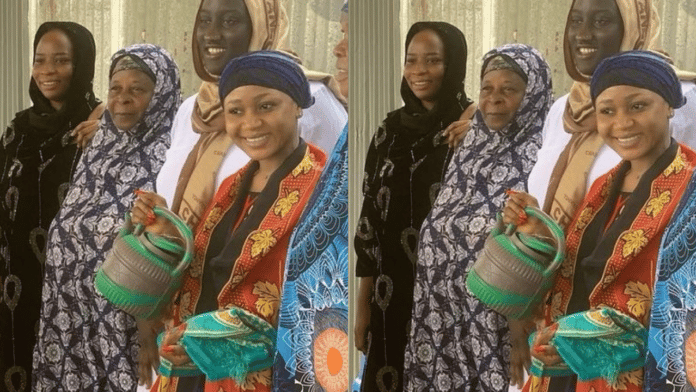 Actress and video vixen, Akuapem Poloo ditched her Christian faith for Islam two days ago for reasons best known to her.

Taking to the internet to break the good news to her teeming fans and the world at large; She shared a set of pictures of herself at the mosque with the caption;

“Alhamdulillah full Muslim now ??? thanks to the Deputy Imam of ASWAJ Ga West and Cheif Imam on Nsakina Quran Reciter and his board for assisting in this”

After the mother of one officially revealed her newly found faith to the world, she came under severe criticisms for supposedly chasing clout just to be in the news.

Akuapem Poloo later took to her IG page to rubbish the claims that she converted to Islam just to chase clout.

Amidst the brouhaha, a new report that has surfaced on the internet and gotten the attention of most Ghanaians alleges that Akuapem Poloo is set to marry a very wealthy Muslim man.

According to sources, Akuapem Poloo has allegedly grabbed one rich wealthy man of the Islamic faith and needs to meet his demands before they officially go through Nikah.

READ ALSO: Akuapem Poloo reacts after Ghanaians bashed her for converting to Islam

This yet-to-be-confirmed report was dropped in the comments section of a post IG blogger, Tutugyagu online shared about Poloo on her page.

Well, Akuapem Poloo is yet to either confirm or dismiss this trending accusation but there might be an iota of truth in it.