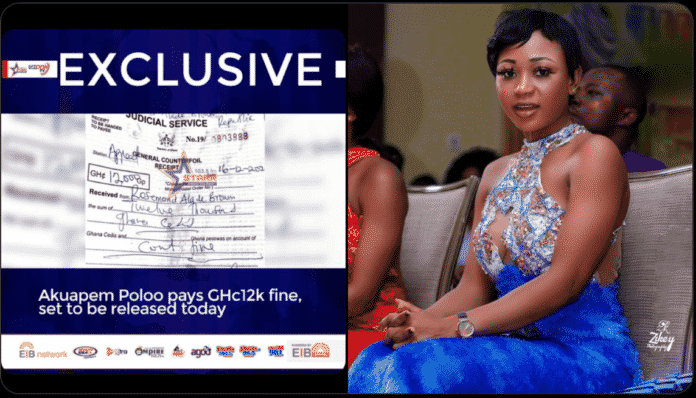 Embattled Ghanaian socialite Akuapem Poloo could finally heave a sigh of relief as she has paid the GH¢12,000 fine which guarantees her freedom from prison.

The Ghanaian actress on December 15, 2021, had her 90-jail term overturned. She was rather fined 1000 penalty units equivalent to GHc12,000 as a replacement for her 90-day custodial sentence.

On Tuesday, December 7, 2021, Lawyers of convicted actress Rosemond Alade Brown filed a notice of appeal at the Court of Appeal challenging the dismissal of her appeal by the High Court.

The High Court ruled that the 90 days custodial sentence imposed on her by the Circuit Court was not “manifestly excessive” and “harsh” and therefore cannot interfere with that decision.

Five days after, her lawyers led by Andrew Kudzo Vortia have filed a notice of appeal to challenge that decision and notice for bail.

A receipt has dropped that confirmed payment of the GH¢12,000 fine by Akuapem Poloo which in the long run serves her free from the shackles of the law.

Rosemond Alade Brown aka Akuapem Poloo was charged and convicted of sharing an unacceptable photo of herself and her young son on social media.