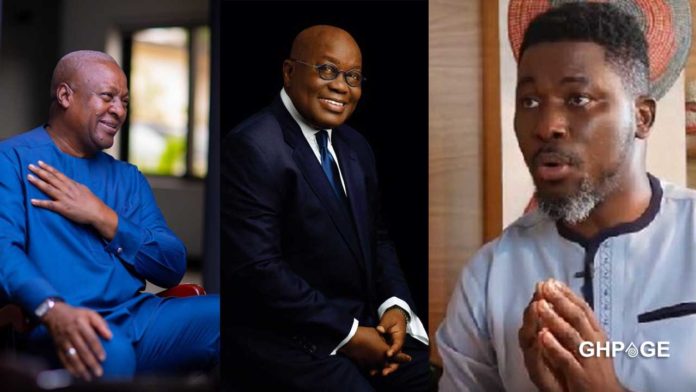 Musician turned Politician and a huge sympathizer of the ruling New Patriotic Party Kwame A Plus has called out the President Nana Akuffo Addo as the failure and a huge disappointment.

A Plus who supported Nana Akuffo Addo in 2012 and 2016 elections revealed that the president has failed to leave up to expectations judging from his promises he to made to Ghanaians before they voted for him.

Speaking in an interview with Nana Romeo on Accra FM, A-Plus stated that he would score Nana Addo 30 out of 100% for his 3years in power.

A Plus who is the founder of ‘The People’s Project’ explained that Nana Akuffo Addo is simply repeating what he accused his predecessor Mahama of doing whiles in government.

He said the Dollar cedi rate which NPP said was high at GHc3.7 is now worse.

“If you tell me that John Mahama is incompetent and one of the reasons was that he had 87 ministers and I go and campaign. You tell me to wake up at dawn to go and do door-to-door [campaigns], moving from room to room at Accra Polytechnic, entering ladies rooms and assuring them that when Nana Addo comes to power, he will reduce the number of ministers and then you come to power and you increase it from 87 to 120-plus, and there are ministries that have three deputy ministers, Chief Directors… when it happens that way, then you have disappointed the people who love you,” he added.

“The followers of NPP, who believed [the things he told them] are disappointed because you told us that the Ghana cedi under John Mahama was GHS3.7 [to USD 1] and it has made the cedi very weak, but you have rather taken us to 5-plus, and that is what hurts. It isn’t that anyone hates Nana and feels he is a bad person”.