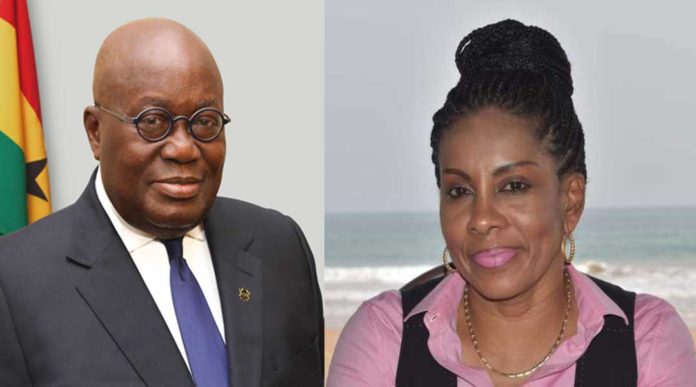 Embattled General Manager of La Palm Beach Hotel, Madam Abena Pokua Boaitey Amoah, is reported to have openly told her staff in plain terms that she is too close to the president Nana Akuffo Addo that none of their complaints against her would make her be sacked.

In a letter endorsed by all staff of the hotel and addressed to the Director-General of SSNIT (which owns the hotel stakes), their boss is arrogant, authoritarian and incompetent, revealing that anytime they complain about her misconduct, she transfers the staff to other hotels or vary the terms of their employment from permanent to casual as punishment.

It was reported she once told the workers and some management personnel on many occasions that her contributions to the ruling New Patriotic Party (NPP) largely informed the President’s decision to reward her by appointing her to the position of Managing Director of La Palm Royal Hotel, “so I can run the hotel as I please.”

According to what we gathered, several attempts by the Industrial and Commercial Workers Union ICU of TUC to meet her based on serious complaints against her proved futile; she reportedly always gives the excuse that she is travelling with Akufo-Addo.

When the Local Union Chairman questioned the appropriateness of her action on some occasions, she immediately ordered the transfer of the Union Chairman to Busua Beach Hotel.

To quote the staff petition:

“When the General Secretary of ICU Ghana called the Managing Director on phone to book appointment for discussion on the issues… she declined and indicated that she had a busy week and that she was moving with His Excellency the President on some ‘errands’.”

The staff members are angry. Hear them:

“As a matter of fact, and without mincing words, the Managing Director is running down the business of the Hotels Le. La Palm Royal, Elmina Beach Resort and Busua Beach Resort which are under her management with her poor human relations, poor industrial relations and her unguarded utterances. the following are some of her unsavoury and unguarded utterances and actions in her labour/ management relationship”.

“We are compelled, as a result of the impropriety, high handedness and insensitive decisions of the Managing Director of La Palm Royal Hotel, Madam Abena Pokua Boaitey Amoah to lodge this complaint against her.” they added.

See letter of their petition below: 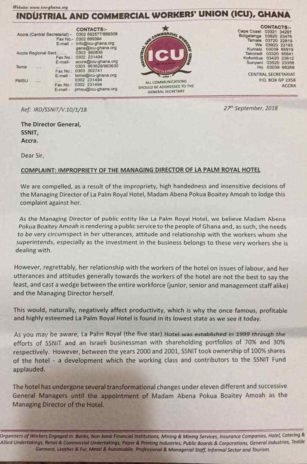 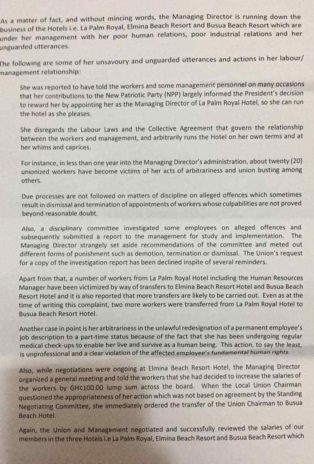