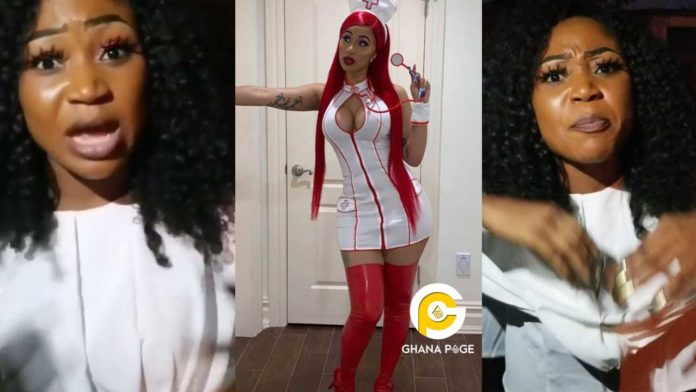 Video vixen turned actress Akuapem Poloo real name Rosemond Brown has taken a swipe at the organizers of ‘Cardi B Live in Ghana’ concert after their snub.

Hours ago we reported that American rapper Cardi B had touched down in Ghana ahead of her performance this evening at the Accra sports stadium.

She was met by some of her fans at the airport upon her arrival but some top Ghanaian celebrities decided to show up at her hotel.

In a video that surfaced first, the ‘I like it’ singer after meeting the celebs at her hotel just passed by them to her hotel room without her even stopping.

This move made Rosemond Brown angry and has taken to her social media page to share her displeasure at the cold attitude showed them by Cardi B.

According to Akuapem Poloo, she doesn’t blame Cardi B for what happened but blames the organizers for failing to tell Cardi B that some popular celebrities in the country were waiting for her at her hotel.

She revealed that she was on set shooting but she had to pause and rush to the hotel only for Cardi B to disrespect them.

Akuapem Poloo further advised that going forward Ghanaians and event organizers should start respecting their celebs so that when the outsiders come, they would also reciprocate that respect to the local stars.