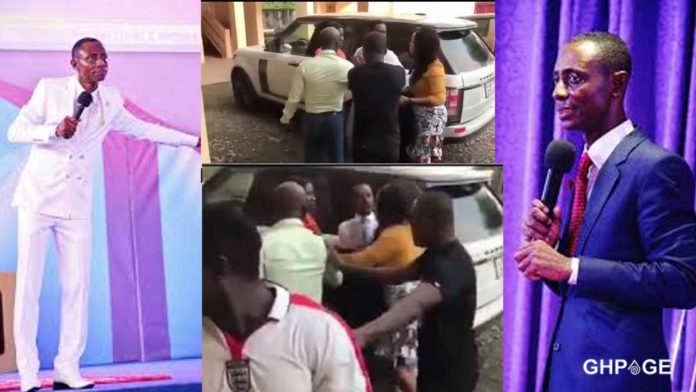 The leader and founder of Zoe Outreach Embassy Pastor Kelvin Kobiri yesterday got one shock in his life when some angry customers of his collapsed investment companies known as EL Real Estates and Tikowrie Capital.

Well, according to sources, the incident happened in Tarkwa at the premises of the Tarkwa Circuit Court to respond to a suit against him for allegedly issuing three dud cheques.

The court, however, was adjourned because the Judge sitting on the case was reported to be on vacation. But news went round that Pastor Kelvin was in town which made some customers of his defunct companies rush to the venue.

He was accosted immediately he drove his white Range Rover into the courtyard, with the young men initially lunging vengeful hands towards him and demanding he pays them their money or he was going nowhere.

Matters came to a head however, when he parked the car. Before he could step out of the car, a young man angrily shoved him, and was soon joined by others who would not listen to any of his comments nor the pleas of others who asked that no one assaults him.

They shoved him about violently, while a lady companion was also pushed off when she tried to intervene. Another man with him who was using his phone to record proceedings had the phone hit from his hands onto the ground.

It took the intervention of armed policemen from the Tarkwa Divisional Police Command to whisk him away and to place him in custody for his own safety.