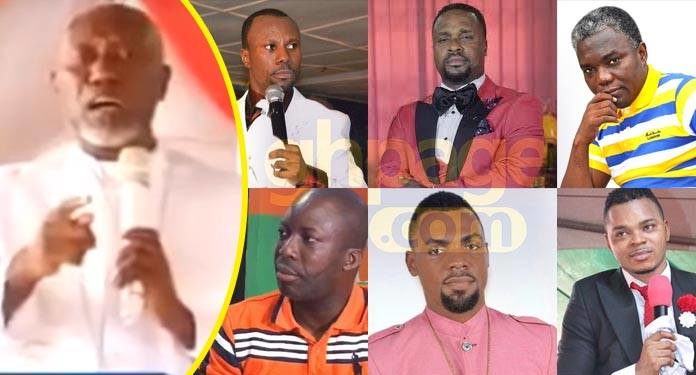 A well-known Kumasi-based Preacher, Apostle Kofi Nkansah-Sarkodie has disclosed that a lot of prophets working in Ghana are self-appointed ones and have not been called by God.

The founder and leader of Open Arms Ministries preaching to his church members said he has spotted many fake prophets who are working in Ghana under the camouflage of the Holy Bible.

Apostle Nkansah-Sarkodie in a video GHPAGE.com has seen revealed these fake prophets which he mentioned Bishop Daniel Obinim, Bishop Bonegas, Prophet Kumchacha, Prophet Ebenezer Opambour, Apostle Agya Dan in Accra as ‘Men of God’ who are leading their followers astray.

The Man Of God adding to his list threw a sign of caution to his church members against these self-acclaimed prophets- told them to be vigilant and stay away from them.

Apostle Nkansah-Sarkodie making things clear on his declaration stated that these false prophets through the past years have demonstrated through their actions as the Bible warned.

He also added that their fake prophetic actions portray through their arrogant lifestyle and their fruits are a clear evidence that Christians can judge them.

The Member of Parliament for Assin Central, Hon. Kennedy Agyapong is also known to have warned President Nana Addo over the activities of these ‘fake prophets’.

However, many Ghanaians in recent years have heavily criticized the activities of these self-appointed prophets and have even asked the Christian Council of Ghana to put a stop to some of their activities.

You Might Like To Watch Video:’Pastor’ Almost Burned Nhyira FM With Magical Powers, Reveals some shocking Secrets Of Ghanaian Prophets