Becca breaks silence; exposes celebs who were snubbed by Cardi B 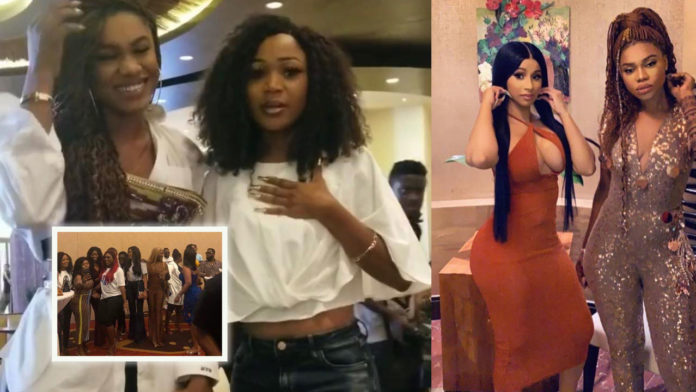 Rebbeca Tobi Daniels aka Becca, the Ghanaian songstress who was the MC at Cardi B’s Meet and Greet with Ghanaian celebrities has finally spoken on her role in the whole saga which left many of the celebrities/ Slay queens disgraced.

According to Becca, Ghpage.com’s exclusive report that she organized the female celebrities for the Meet and Greet Cardi is true.

She alone was officially tasked by the organizers in collaboration with Cardi B’s management to have a one on one meeting with the American rapper.

But, she negotiated with the organizer’s and they agreed for her to invite a few of the female celebrities.

Becca confessed she invited only female musicians and two other friends. The people she invited include Moesha Boduong, Efia Odo, Wendy Shay, Eno Barony and Sister Derby to come along.

SEE ALSO: List of all the female Ghanaian celebrities aka part-time Slay Queens Cardi B snubbed for a stake of Khebab (Photo)

Becca denied inviting Akuapem Poloo, Afia Schwarzenegger, Salma Mumin, and all the other female celebrities aka Slay Queens who gathered at the Kempinski.

The talented songstress revealed she was surprised when they turned up in their numbers but she was not worried about them.

Becca confessed that Cardi B indeed did not know about the Meet and Greet because her manager told her late. Even that, Cardi B only knew she was meeting just Becca at the time.

Listen to Becca Below

Cardi has already apologized to Ghanaian celebrities who in their numbers waited for her for over 9 yeara whiles she enjoyed her stake of Chinchinga.

Share
Facebook
Twitter
WhatsApp
Previous articleAny man who wants to marry me must be ready to pay me on a monthly basis – Afia Schwar
Next articleLoad of trash: Nana Aba Anamoah hits back at Abeiku Santana again