Begger rejects sachet water rather demands for a bottled water

It a common practice to see people on the street begging for money in other to buy food or water but hardly do we meet beggers who open up to tell you their preference when you try to offer help to them.

A social media user has shared his experience with a begger he decided to help by buying him sachet water popularly known as pure water only to be told by him that he doesn’t take sachet water by rather bottled water.

The social media user identified as Martin Beck Nworah shared his experience on his Facebook timeline where he posted; 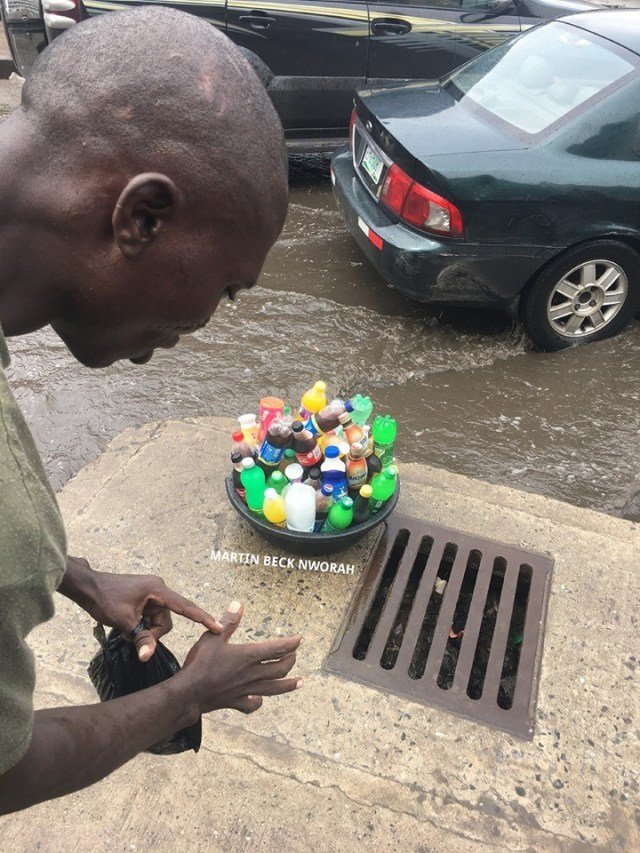 “Two things made me snap this picture on Saturday at Obalende.
I was waiting for my partner to link up for our Lekki movement to gather interviews for Tales Of Nigerians when the guy in this picture came to stand beside me.

The woman who dropped that bowel of beverages ran around to sell to people and run back.

So I kept an eye over her wares while waiting for my partner to arrive.
This guy spoke in Yoruba (I understand better Yoruba now) and was begging the woman to give him water to drink.

She told him to go across the road and collect a free “pure water” in the normal sachet. But he didn’t want to go, he wanted the plastic water. So he kept nagging.

He stood there and saw the woman running around, yet he didn’t extend a hand to help her. He kept on complaining how she doesn’t want to help him. I asked him if he had any deformity or issues and he said no. I told him to go across the street and collect the pure water as the woman told him but he said no.

He looked really battered from his looks, more like a street guy. When the woman got tired of the guy standing there, she ran across the street to get the water and give it to the guy.

Clearly, from the little exchange we had there, this poor guy needed help. He wanted water. But he was a beggar with a strong sense of entitlement. I really don’t know where that came from.

Oh, after getting the water, he started asking for a drink…LOL.
But I think I understand something about being poor, because it is a background I can relate with.

Many times, we feel everybody else owes us something. We blame everyone else for our shortcomings and bad lucks because they are the witches and wizards stopping our shine. But bring a little task and they won’t do it. They will easily get tired and lazy around.

This guy is just a reflection of what our larger society is gradually becoming, where people hide behind their keypads to pass judgment and wield strong feelings of entitlement for reasons best known to them.

Well, as the son of Nebu, there are few things I can publicly complain about. Nobody owes me anything to make my life awesome. It is my responsibility and when I find kind hearted people who support me, I am deeply grateful to the universe.

Till we get to the Promised Land, I shall be waiting for when you will pass me a glass of water and thank God for the gift of grace for the race. 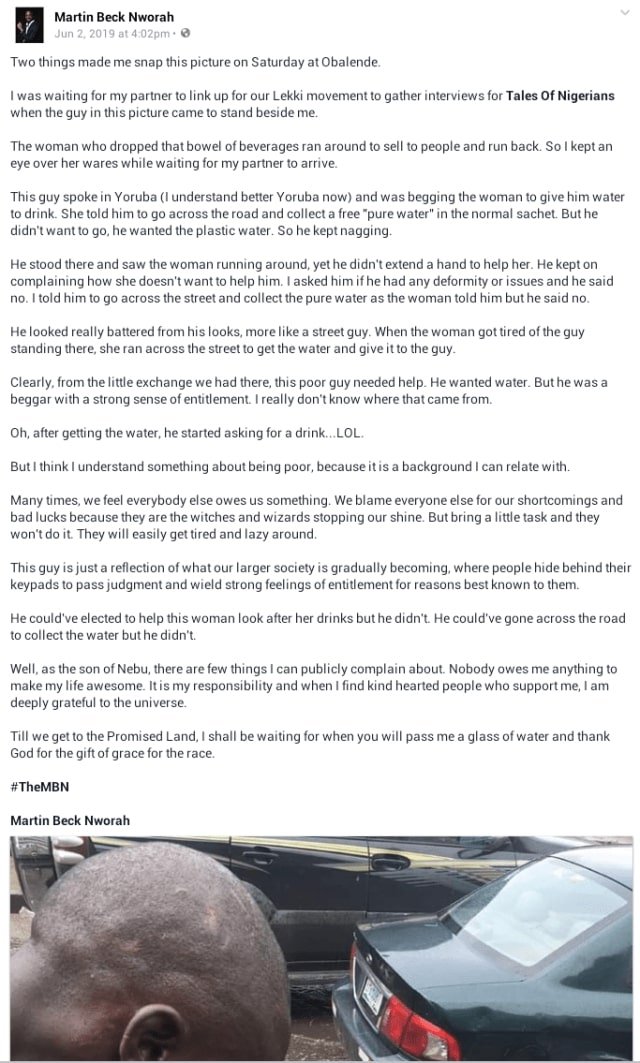